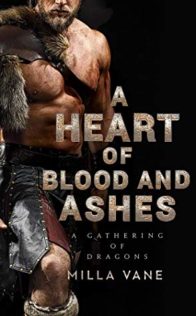 A Heart of Blood and Ashes (A Gathering of Dragons, #1) by Milla Vane

A generation past, the western realms were embroiled in endless war. Then the Destroyer came. From the blood and ashes he left behind, a tenuous alliance rose between the barbarian riders of Parsathe and the walled kingdoms of the south. That alliance is all that stands against the return of an ancient evil--until the barbarian king and queen are slain in an act of bloody betrayal.

Though forbidden by the alliance council to kill the corrupt king responsible for his parents' murders, Maddek vows to avenge them, even if it costs him the Parsathean crown. But when he learns it was the king's daughter who lured his parents to their deaths, the barbarian warrior is determined to make her pay.

Yet the woman Maddek captures is not what he expected. Though the last in a line of legendary warrior-queens, Yvenne is small and weak, and the sharpest weapons she wields are her mind and her tongue. Even more surprising is the marriage she proposes to unite them in their goals and to claim their thrones--because her desire for vengeance against her father burns even hotter than his own...

Great adventure with a Game of Thrones feel. Loved the main characters. Can’t wait for more.

Maddek, Commander of the Alliance Army, has just learned of the death of his parents, the King and Queen of Parsathe.  He is given no details until he arrives at the Alliance Council. He was imagining that a beast attack could be the only thing to fell both his parents but is devastated to learn that treachery is what brought down his noble mother and father.  Zhalen, ruler of Syssia, accused his father of attacking a woman in his household and had him executed and imprisoned his mother until her attempted escape got her raped and beheaded.  There is nothing more sacred to the Parsathean warriors than telling the truth and keeping an oath. A Parsathean would never rape, ever, nor would his father have broken his oath of fidelity to his mother. These lies are the worst insult to his people, but the Alliance Council has declared that the matter was investigated and Zhalen was justified in their deaths. Of course, it doesn’t hurt that two of Zhalen’s sons are on the Council, having taken over neighboring kingdoms under very questionable circumstances.   If Maddek defies the Alliance, he will destroy all that his parents worked for but he won’t be denied his vengeance against Zhalen.   Maddek receives a message that Zhalen’s daughter, the one who requested his parents travel to Syssia, is traveling outside the city.  If Maddek can’t have his vengeance against Zhalen, he will take it out on his only daughter and deliver her corpse to Syssia.

Yvenne has spent her entire life locked away in a tower.  Syssia takes its Queen from the royal line of warrior queens.  But as brilliant a warrior as her mother was, she made the mistake of choosing Zhalen as her husband.  He poisoned her upon marriage and kept her locked away “holding her throne” until a female child would be borne.   Zhalen raped his weakened wife until she bore his five sons and one premature and physically frail daughter.  But even a frail daughter would be Queen and hold the throne over Zhalen and his sons so he kept her locked away with her mother so no one  knew about her.  Yvenne might be physically weak, but her mother taught her everything she needed to know about being a Queen and the leader of her people.  Yvenne managed to sneak a letter out inviting the King and Queen of Parsathe to meet her as a prospective bride to his son, Maddek.   Yvenne isn’t old enough to take the throne, but if she bears a child, she can become Queen.  She hoped that marrying a great warrior like Maddek would provide her with the strength she cannot physically wield herself and help her take her place as Queen but her plan fails and it is his parents who pay the price for that failure.

Now that it is known a daughter was borne to the Royal House of Syssia, her father is sending her to marry the old and weak king in the neighboring kingdom so that he will be able to make a grab for that Kingdom as well.   Knowing Maddek has come to the Alliance Council, Yvenne has one last chance to make an alliance with Maddek sending a messenger to let him know that Zhalen’s daughter will be unguarded on the road.  While Maddek wants her blood as vengeance, Yvenne needs to convince him that their marriage and the birth of a child will allow Maddek to get the vengeance against Zhalen that he desires.

The biggest problem between them is that Maddek requires truth at all times, something that his mother explained to Yvenne, but he doesn’t believe her declaration that Maddek’s mother chose Yvenne as his bride.   He is convinced that Yvenne is as much a liar as her father and brothers.  She wants an alliance and Maddek is determined to use her as a lure to kill her father.

Maddek and his men need to get to their homeland so that Maddek’s people can vote if Maddek will be the new king.  Traveling from the Alliance Council keeps them are on the road for about a month to reach their people so we have lots of time to get to know this group, and allows Maddek and Yvenne to get to know each other.  They are greatly attracted to each but it keeps coming down to Maddek not believing that Yvenne speaks the truth, which is the biggest offense to his people.

You have to feel for Yvenne, she has lived her life in one room and is finally outside for the first time.  Everything she sees is amazing, she even loves feeling a rainstorm on her face.  Her father kept her half-starved so she wants to taste everything and her first question when she sees a new animal on their journey is “can you eat it?”  She has hope for her future for the first time ever but Maddek’s disbelief keeps crushing her fragile hope.  It is so horrible.  They are getting along so well and you see love blooming, then he’s all “but she’s a liar” and Yvenne is crushed again.

Yvenne  might be physically weak, but she is a Queen at heart and in her thinking and strategizing.   Maddek comes to respect this and is blind-sighted when Yvenne calls him out telling him that while Maddek is  a great warrior, he thinks like a warrior and not a King and until he can think like a King, he will never be a good leader for his people.  So they make a trade,  Maddek will teach Yvenne how to overcome her weaknesses and become a warrior-queen like her foremothers and she will teach him what he needs to know to be a good king.

While I wasn’t a fan of Game of Thrones, this gave me the same feeling of time period, of Kingdoms at war and trying to make alliances to fight a greater enemy.   There is black magic but no actual dragons (and thankfully no incest).   I think the story had a great blend of getting to know the main characters as well as secondary characters, world building,  danger and adventure during their travels and of course, romance and whether Maddek and Yvenne can overcome their differences for the greater good and hopefully fall in love along the way.

I have read a short story by Milla Vane once before which I had also indicated that I like even thought it wasn’t my usual choice  of story.  It appears to take place in the same world building but doesn’t cross over with this except that Yvenne makes mention that one of the warriors her mother was considering for Yvenne was the hero from that story.

I am sad the next book, A Touch of Stone and Snow, will not feature Maddek and Yvenne but I am excited to see where the next story will take us.

“Is being born of her poisoned flesh why you are so much smaller and weaker than Nyset’s other heirs?”

Her shoulders lifted in a careless shrug. “My brothers seem unaffected. But I was born almost two full turns too early, so small that my mother said she could hold me in the palm of her hand. I should not have survived. So perhaps that is where all of my goddess-given strength went–it was spent keeping me alive as a babe. And it pleased my father that I was so frail. He believed my weakness and hunger would make me easier to control.”

Maddek’s bark of laughter drew her gaze to his again. “Your father is truly a fool,” he told her. “For I have only known you a short time and know you could never be easily controlled. So you need not worry your husband will make the same mistake.”

Her grin matched his, and she held his eyes for a long moment that heated his blood. Slowly her smile faded, thought the intensity of her stare did not.

A soft frown puckered the skin between her eyebrows as she continued to study him. “You are much more handsome when you scowl.”

“You are,” she said primly. “You should refrain from smiling, especially after we are married.”

“That will be no hardship. After we marry, I’ll have little reason to smile.”

“I will make sure of it. It is so much more pleasant to look upon your face when you are unhappy, I shall endeavor to make you life a misery.” She eyed the grin that broadened in response to that. “Already you deliberately displease me.” Looking to Kelir, who was shaking with mirth upon his horse, she said. “Remember this moment if ever anyone speaks of how bitterly contentious our marriage is. I only have one small request of my would-be husband–that he does not smile–and immediately he denies me.”

“I will remember it, my lady,” the warrior choked out.

“As I will,” Maddek said dryly.

She gave him such a slyly amused look in response that it seemed to Madden the worst misery would come not after their marriage, but during these next seven days when he would not have her beneath him, and instead rode across Goge with his cock forged of molten steel.

Her eyebrows arched, head tilted as she regarded him. “Now you scowl at me. It please me that you are so easily trained. I have heard every good husband out to be–though perhaps not one who will also be king.”

Laughter danced in her pale eyes when his scowl only deepened. But despite the ache in his loins, his mood was still light–and perhaps it was best to let her believe he would be easily led.