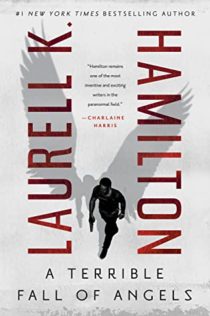 Angels walk among us, but so do other unearthly beings in this brand new series by #1 New York Times Bestselling author Laurell K. Hamilton.
Meet Detective Zaniel Havelock, a man with the special ability to communicate directly with angels. A former trained Angel speaker, he devoted his life to serving both the celestial beings and his fellow humans with his gift, but a terrible betrayal compelled him to leave that life behind. Now he’s a cop who is still working on the side of angels. But where there are angels, there are also demons. There’s no question that there’s evil at work when he’s called in to examine the murder scene of a college student—but is it just the evil that one human being can do to another, or is it something more? When demonic possession is a possibility, even angelic protection can only go so far. The race is on to stop a killer before he finds his next victim, as Zaniel is forced to confront his own very personal demons, and the past he never truly left behind.
The first in a new series from the author of the Anita Blake and Merry Gentry series.

I see this one ascending the best seller lists.

This new series by Laurell K. Hamilton features Detective Zaniel Havelock; “Havoc” to his army buddies and the men and woman of the police department, but Zaniel to the more celestial friends and co-workers. Zaniel spent most of his life training to be a messenger of the angels, although messenger is too broad a term as those training at the College of Angels since there were so many ways to serve the celestial beings and deliver their graces to the humans of the earth. Zaniel’s future at the College was promising and the celestials favored Zaniel, perhaps too much, and after a dozen years of training with the Angels, Zaniel left the College to join the army and later the police, working once again with the Heavens in the “Heaven and Hell” Department, and once again working as a buffer between angels and humans.

When angels seem to have involved themselves into a recent murder, Zaniel is called in to investigate what originally looks like a typical murder but the angels insist that something more sinister is at work, as God had plans for the woman who was murdered and her death is interfering with God’s Plan. Havoc is skeptical at first since nothing interferes with God’s Plan, but when he finds something walking the earth from the bowels of Hell itself, he isn’t certain if a former Angel Speaker is strong enough to defeat such a being without some divine intervention of his own.

I think you need to straddle the fence in your personal beliefs to enjoy this series. Too religious and you might take offense at some things and not enough, and you scoff at some of the thoughts and concepts of heaven and hell among us.  And I don’t mean that your beliefs need to center on a specific religious teaching, most of the divine concepts discuss the same basic thoughts of God and the Devil and many of Havoc’s squad are made up of those with some type of religious magic. Havoc’s Lieutenant is a voodoo priest and another woman is a wiccan priestess. Each member of the Heaven and Hell division brings in their own special ability to drive away the demons so believing in angels but contempt for witches will skew your enjoyment of the story. I enjoyed the fact the mix of magics that were brought into the story and how well the department blended those magics and accepted that there wasn’t simply one way to fight the demons.

We are also introduced to the idea that not everyone supports the College of Angels and that not every facet of Angel Speaking is a slice of Heaven. There is discussion of a documentary about the College that paints it as more of a cult and as most of the students are recruited between the ages of 5 and 7, that once these kids go in, that parents aren’t able to reclaim their children, whether it is because they are blocked by the College itself or their children are so brainwashed about their own salience in standing next to the divine.

I thought it was interesting that Hamilton not only gives leave to Havoc to ask for divine intervention (either for God or angels) but in doing so has to tread carefully between asking assistance vs. demanding help be given. We are also told that everyone has a guardian angel but that they cannot interfere with free will so once again, careful wording is needed for your guardian angel to help keep you safe even from yourself. And again in the blending of thoughts and beliefs, angels aren’t the only guardians which people have and animal totems are also introduced as protectors and the question arises of whether the College of Angels actively destroys any connection to spirits who are not clearly celestial in nature.

I enjoyed how the story blended the excitement of a crime drama with the theological concepts of heaven/hell, angels/demons, and magics which are black, white or grey. Many ideas had me thinking through my own beliefs, although since I absolutely love paranormal fiction, you can guess I am pretty open to most ideas.

Sadly, I wish I had found this story after at least a second novel was published. While there was a current investigation to keep us focused, there was a great deal of world building involved and character introduction and backgrounds to get through. (This is why I love ebooks, I have highlights and notes everywhere.) By the time I hit the end of the story, I was fully invested in the world building and ready to jump into another story and this one isn’t even scheduled for release until August 17th. Now the waiting begins.

A good crime drama always has one ball busting cop, and even a demon can fall for the shenanigans of a good one.

I braced my foot against the doorframe to help me hold Kate’s arm outside the room. I could feel her fingernails beginning to cut into my arm through my suit jacket. It reminded me of how my wife had held onto me when our son was born. Now I held on to Kate and she clung to me not out of pain and life but out of pure terror; the pain would come later.

She screamed and I jumped because nothing had changed that I could see. That one second of lost concentration let the demon pull her farther into the room, so that my knuckles banged on the doorframe. I prayed that the Big Guy would help me hold on, that he would help me be strong enough to save her, and I fought to gain back a few inches.

Still hidden by the door, the demon said, “You’re strong for a human, Havoc; may I call you Havoc? I like the name, by the way; are you sure you’re not one of ours?  Kate here is made of sterner stuff than the cop was, but if you hold on tight enough to pretty Kate here, we’ll tear her apart, too, and that’s fine with me. You can keep one arm while we fuck her. It takes time to bleed to death; she’ll still be warm when we finish.”

“I thought demons had more stamina than that,” a woman’s voice from behind me said.

I felt Kate move toward me, as if the demon had lost concentration this time.

I didn’t turn around to see Detective Lila Bridges, but I knew the voice and the attitude. She was a real ball buster and I half loved her for it in that moment.

“Hey, Havoc,” she said, and then louder, “Demon, you in the room, are you telling me that all that hype about demons being fantastic fucks is a lie? Hell’s bells, there go all my teenage fantasies. Satan take you back to Hell if you disappoint us that much.”

“I will tear the woman apart and fuck the pieces!” It pulled harder and I braced against the doorjamb and the door.

Kate whimpered as the demon pulled on her dislocated shoulder; most people would have been screaming by now.

“Where’s the famous seduction of demonkind? Is that just a lie like the whole bulletproof thing, or are you just not that powerful a demon? Is that why they let you out of Hell, because you’re just so fucking weak?” Bridges said, her voice thick with scorn.

“I am not weak!” the demon screamed this time, and it was more whine than roar. Kate screamed as he pulled so hard I had to give ground or pull her apart.

“Come out and prove it to me, demon, or are you just another weakass creep? I bet you’re Hell’s version of that creepy guy who lives in his mom’s basement and whines online that he can’t get a woman to fuck him. Oh wait, that is what Mark Cookson is, except he lived in the dorm.”

“Shut up, you fucking bitch!”

“Touch talk, brimstone boy, come out of the room and make me shut up, if you’re demon enough to do it.”

“No, you’re not demon enough to do it. Good on you admitting it out loud.”

“She is baiting us,” the demon said; he wasn’t talking to any of us.

“With a tiny little penis,” she said, her delivery so dry that it almost made me smile, except I was looking at Kate’s face going paler by the second. Things were breaking in her arms and shoulders from the tug-of-war; if she passed out from the pain, I wasn’t sure what would happen.

Kate swallowed hard enough for me to hear, and whispered, “I like her.”