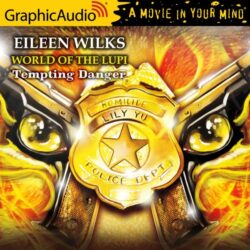 Tempting Danger (World of the Lupi, #1) by Eileen Wilks

The USA Today bestselling author tempts success in this stunning debut novel.
National bestselling author Eileen Wilks draws readers into a bold new world where the magical and mundane co-exist in an uneasy alliance--and a cop balanced on her own knife-edged struggle is their only hope against a cold-blooded killer.
Lily Yu is a San Diego police detective investigating a series of grisly murders that appear to be the work of a werewolf. To hunt down the killer, she must infiltrate the clans. Only one man can help her--a were named Rule Turner, a prince of the lupi, whose charismatic presence disturbs Lily. Rule has his own reasons for helping the investigation--reasons he doesn't want to share with Lily. Logic and honor demand she keep her distance, but the attraction between them is immediate and devastating-and beyond human reason. Now, in a race to fend off evil, Lily finds herself in uncharted territory, tested as never before, and at her back a man who she's not sure she can trust.

An Urban Fantasy series with a lot of potential. I really like the Graphic Audio presentation.

Det. Lily Yu is a new homicide detective for the San Diego Police Department. Her first big homicide is a man found on a playground who died from what only can be a lupi attack. Since the man’s wife is involved with a lupi, and not just any lupi, but the Lu Nuncio or heir to one of the more powerful packs. That is how Lily first meets Rule Turner, a man who has women falling at his feet. Lily doesn’t have any interest in being one of the dozens, even if he wasn’t a suspect in a murder. But after their first touch in the form of a handshake, something happens between the two of them, both desperate to be close to one another. Being lupi, Rule is aware that sometimes their godess “the lady” gifts a lupi with a Chosen and like it or not, Lily is Rule’s Chosen. He just has to convince her that fate has destined for them to be together. That gets just a tiny bit easier when Rule is ruled out as a suspect.

But that is just the start as more bodies show up, including the witness whose testimony cleared Rule of suspicion. Again, the scene looks like a lupi kill, but is this too perfect a scene? Is someone trying to pin murders on the lupi and Rule particularly? Is this personal or does it have something to do with the bill before Congress which would grant the lupi the same rights as a regular human?  Since Rule’s father, the leader or Rho, of the pack was also attacked, things are pointing towards a much larger conspiracy.

When things begin to point to the murderer using magical means, that means a sorcerer is behind it. Except sorcery is illegal and most sorcerers were killed during the purge. Is the murder one of Rule’s closest friend, Cullen a lupi-sorcerer or is that magic user a member of a growing cult known as the Azá?

With the bond binding them tightly together, Lily and Rule will need to work fast before they themselves become the next magical target for the killer.

I read this book already. I had to have read this because I have a Kindle copy with names and scenes already highlighted. Some scenes I remembered but most of the story was unfamiliar.
I do remember that I didn’t like the fact that they need to stay within a certain distance of each other or they would get lightheaded and have heart palpitations. I foresee future problems with this link.

I know I read this story but I don’t know why I never reviewed it nor why I never grabbed the next book in the series. I will say I did enjoy the Graphic Audio presentation and maybe that had to do with why I liked it this time.   They were very creative with certain things, including adding a little echo-y effect when the characters had internal monologuing. I do have to say that I disappointed to find that at this presentation by Graphic Audio is abridged. When I went to re-read a scene, because I knew I had a copy of the book, I there were were several scenes that were longer in the book. I am sure that not all were necessary, such as when Cullen wakes up in his cabin, we hear about him getting up and grabbing some food, etc. none of which was drove the story forward but then I end up wondering what other things I might have missed.

Regardless, I am going to keep trying a few more in this series from the Graphic Audio people. I do wish they would list which narrator plays which part because I know I recognize the man playing Rule, I just can’t think which other story he narrated.

He shook his head, his grin fading. “We have so much to learn about each other.” He ran his hands up her sides. “Later. I need you now, my nadia, my only one.” He crushed his mouth down on hers.

Everything in her leaped to meet him. His taste–yes, she’d tasted him before, and she needed that, needed him–

A terrible, unearthly howl filled the air. She jerked back, eyes wide. He jolted and tilted his head up, eyes closed, his chest heaving. “Mother help me. Your cat wants in.”

Oh. Oh, yes, of course, she thought, leaning her head on his chest, trying to capture her breath. That was definitely Harry, howling his challenge. “He smells you.”

“Of course.” He sighed. “A dog would have been so much easier. And he’s male, too. You had better let him in.”

“But–” But I can’t let go, can’t just stop, I hurt with wanting. Couldn’t you–couldn’t we…she shook her head, denying the image that had flashed through it. Her body mocked her, telling her clearly what she needed. Him. In her. Now. “I’m losing my mind.”

“You’ll regain it, but not until we join. First, though–” He grimaced, dropping his arms as he stepped back. “I must meet your cat.”

She swallowed. She had to let Harry in. The neighbors would complain, maybe throw things at him. She didn’t want him hurt. He was still howling, that rising and falling combat song of his. “I don’t think meeting him is a good idea. I’ll put him in the bedroom.”

He might hurt you, she thought, and grimaced. That was ridiculous. Rule fought other werewolves, for crying out loud. He could handle a cat. Even a seventeen pounder with a major attitude problem. Couldn’t he?

She glanced over her shoulder at Rule as she reached the door. He crouched in the center of the room, knees flexed, arms ready. He was taking Harry’s challenge seriously.

Rule’s eyebrows rose. “You named your cat for a fictional cop who blasts the bad guys?”

“It fits. Though his definition of bad guys is pretty inclusive.” She turned the lock and opened the door.

They moved too fast, cat and man both, for Lily’s eyes to track them properly. She did see Harry leap. Rule seemed to translate from one spot to another without touching all the places between–something she’d seen Harry do at times. Then Harry was crouched a couple feet away, ears flat and tail lashing.

“That’s right,” Rule murmured, not taking he eyes off the cat. “You’ve the right to protect, but I won’t hurt her. You don’t wish to share, either, but that you will have to do.”

Harry leaped again. Rule ducked–and had a cat on his back. There was another blur of motion, this one ending with Rule rolling on the floor, Harry separated and spitting.

“Stay back,” Rule snapped without looking at her.

She halted. Man and cat stared at each other out of narrowed eyes while she tried to figure out why she was following Rule’s orders. And what, exactly, was going on.

Abruptly Harry gave one last growl and sat back on his haunches, looking away from Rule.

Rule straightened and turned his head, as if fascinated by the wall.

Harry stood, twitched his tail once, and stalked over to her, his fur still bristled. He stropped her leg once, meowed, and headed for the kitchen.

“He…” She swallowed what might have been laughter. “He wants me to feed him.”

“He needs to assert his place with you,” Rule said, still studying the wall.

“This is weird.” But she followed Harry into the kitchen, were he waited by his dish, glaring at her. She fed him and went back in the living room, shaking her head. “I’m obeying a cat and a sometimes wolf. I don’t know what I’m doing. Obviously, I’ve lost my mind. You’re still bleeding.” There were two crimson tracks along his cheek. One had bled down his neck. The other stopped just below his eye. She swallowed. “Did you let him do that? He barely missed your eye.”

“Don’t belittle your champion’s skills,” he said wryly. “I let him do nothing.”

“You knew he would attack you when I opened the door.”

He shrugged. “I allowed him to set the terms of our negotiation. The claws in my face were entirely his idea, however.”