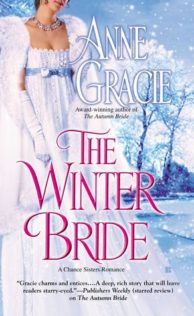 In Autumn Bride, we met Abigail and her sister, Jane, who have joined with their new sisters of the heart, Damaris and Daisy. It was Daisy who originally contacted Abigail to help Jane and Damaris escape the brothel where the girls had been sold to after being drugged and kidnapped. It is Abigail who first met Lady Beatrice, who was being abused by her servants. Together these five woman are working on rebuilding their lives. Lady Beatrice has recovered enough to reenter society and she is introducing the girls as her nieces.

With Abigail now married to her own nephew, Lady Beatrice wants the rest of the girls to have their official coming out. Jane is excited to finally be introduced to a possible husband, but Damaris is hiding more secrets than she has revealed to her sisters. Secrets that she feels makes her unacceptable as a wife. She is refusing to attend the season since she has no intention of finding a husband. Damaris only wants to buy a little cottage where she can live in safety and peace.

When Max took Abigail on their honeymoon, he left his friend, Freddy Moniker-Coombes to take care of his Aunt and the girls. Freddy is a young man with a title and he is tired of being chased by every mother with an unmarried daughter and does everything that he can do to avoid “muffins.” He is not thrilled with the task of taking care of unmarried girls, especially when he catches Damaris walking alone in an unsafe neighborhood–to a job no less. How is he supposed to take care of muffins who walk around at ungodly hours of the morning to go to work of all places? It isn’t bad enough he has to get up out of a warm bed to make sure Damaris arrives safely, but the viper of a boss keeps accusing him of trying to ruin Damaris. As if, he would have anything to do with an unmarried muffin if Max hadn’t asked for his help.

But Damaris might be just what Freddy needs when he receives a letter from his mother. She is planning a house party with every available muffin in the neighborhood and he is expected to announce his engagement at the end of the weekend. Freddy realizes that if shows up already engaged, he will be able to escape his mother’s further matchmaking. Damaris is an odd girl who has declared that she has no interest in getting married. Freddy’s plan is for Damaris to pretend to be his fiance, he can walk away no worse for wear and Damaris can then call off the engagement.

Convincing Damaris isn’t an easy task, but the gift of a cottage in Damaris’s name will make both of their dreams come true. If only their time together hadn’t changed those dreams to thoughts of a real marriage to someone who is quite perfect for them.

THOUGHTS:
The star of this series is still Lady Beatrice, although she is not in as much of the story as in The Autumn Bride. She quickly sees through the farce that Damaris and Freddy are trying to perpetrate on his family, but she also sees something in the two of them that she knows compliments each other. She has noticed that the marriage-fearing Freddy always stares at Damaris and has been walking her to work each morning. So the “frail” Lady Beatrice is back on her game, plotting the fates of her girls, including publicly denying knowing anything about the girls having large dowries, which causes an increased attendance of young, eligible men in their reading circle.  Lady Beatrice should be a politician since she is so awesome at getting the public to buy her lies.

Damaris has had a difficult life and once she confesses her secrets, we truly see her inner strength and we are not the only ones.  Freddy truly is the best man for her since he can see past her “flaws” for the brave and beautiful woman she is inside.   I don’t see the reason behind the big production of how carriage sick Damaris becomes except to be the underlying reason why they eventually get trapped in a open buggy during a rain storm and are forced to be alone out of the rain.   Shocking!

We are introduced to Max’s Irish partner, Flynn, who has come to London to meet a well-bred lady so that he can buy his way into the Parlors of London as rich potential husband. He is a lively and fun character. Freddy makes his toss out all of his bright colored coats and crazy pants for the usual subdued outfits of an English gentleman but it is Lady Beatrice and Daisy who convince him to wear the interesting waistcoats and keep his earring to keep him standing out from the crowd. I look forward to reading Flynn’s story.

This series stands out from the usual Regency Romances for its interesting cast of unusual and memorable characters.

“You say this is the famous Captain Flynn Max has spoken of?” Lady Beatrice eyed him critically through her lorgnette. A sharp old bird, Flynn thought, the kind who didn’t miss much, even without that eyepiece.

“Just Mr. Flynn, if you please, m’lady. I’m no longer captain of a ship. And I don’t know about famous…”

“Pish-tush! Max hold us quite a bit about his friend.” She swiveled in her chair and said to Freddy, “Are you sure?”

Flynn choked back a laugh. Bloody aristocracy, didn’t care what they said about the peasants, never mind that he was right here in front of her. “I’m Max’s partner, right enough,” he assured her.

“Why would you doubt it, Lady Beatrice?” the pretty blonde asked, giving Flynn a flirtatious smile. Jane, Flynn reminded himself. Angelically fair, and lookin’ like a fairy-tale princess. Next to her was Damaris, pale with dark hair pulled up in an elegant knot. She hadn’t said a word since they were introduced, but those dark eyes missed little, he’d wager. And then there was the little one, Daisy, sitting on a stool, sewing, taking in every thing. Also sharp as a tack, he reckoned. All in all, Flynn thought with satisfaction, quite a collection of interesting females.

The old lady sighed. “Max led me to expect somebody more…colorful. Flamboyant.” It was clear she was disappointed.

“Hah!” Flynn turned an accusing eye on Freddy. “When I arrived on this shore, Lady Beatrice, I assure you I was a great deal more colorful. But since then I’ve been shaved, shorn, stripped of me finery and dressed with all the liveliness of a wet week in Lent, all in the name of lookin’ more like a gentleman.”

“Just one, m’lady, but I was convinced to remove it.”

Flynn produced the gold earring from his pocket.

Flynn inserted the ring in his ear.

“I was informed,” he said with a withering glance at Hyphen-Hyphen, “that no English gentleman would wear such an item.”

Lady Beatrice nodded. “Quite correct, but you’re not an English gentleman, are you?” She smiled in a way that took the sting out. “And there’s no point disguising the fact, since the moment you open your mouth everyone will know you’re Irish.” She turned to the three young ladies. “What do you think, gels? Should Mr. Flynn give up his earring, or do we like the hint of pirate air it gives him?” There was no doubt what the old lady preferred.

Damaris inclined her head thoughtfully, then nodded. “If you’d asked me before, I would have thought that an earring would have detracted from a man’s masculinity, but now, seeing Mr. Flynn wearing one, it doesn’t detract at all, does it? It only adds to it.”

“Daisy, what so you think?” Jane asked.

Daisy glanced at Flynn and wrinkled her nose. “I don’t like it. It makes ‘im look like a common sailor from down the docks, or some bloke wiv an organ and a monkey.”

“Nonsense,” Lady Beatrice said briskly. “Mr. Flynn carries it off with an air. And no common sailor or organ-grinder could afford clothes like that, even if they are a little on the dull side.”

“Dull?” Monkton-Coombes said indignantly. “He couldn’t possibly enter society dressed the way he was. Max asked me to ensure Flynn had access to the finest sartorial advice, and dash it, that’s what I did. Introduced him to my own tailor.”

“And he looks almost as elegant as you, dear boy; you’ve done a fine job,” the old lady assured him, examining Flynn again through her lorgnette. “Only…I think Mr. Flynn needs something a little more…distinctive.”

“Distinctive?” Both men spoke at once.

She nodded. “Something to ensure the ton knows you don’t give the snap of your fingers for their good opinion.”

“But I thought—” Flynn began.

“I would advise you to keep wearing your earring, Mr. Flynn. It will bring you a little notice, a hint of notoriety.” She gave him a sharp look. “Will you mind that?”

“No indeed, ma’am. I’m here to find meself a fine lady to wed, but I’m not ashamed of who I am or what I’ve done. And while I’m happy to have me manners polished up a bit, and to wear the kind of clothes Hyph-er, Mr. Monkton-Coombes advises, I’ll not be pretending I’m other than who I am.”

“A fine lady, is it?” The old lady’s elegantly plucked brows rose.

“Yes, ma’am,” Flynn said coolly. “The finest young lady in London. I’ve always aimed high in everything I’ve done, and I see no reason to change.”

“You know that being Irish–and, I presume, Catholic–will count against you? And I understand from Max you have no family remaining alive, and what you had was wholly undistinguished.”

She called a spade a spade, this old bird, and Flynn liked her the better for it. “Correct, m’lady. Still and all, I reckon I’m a bit of a catch. I’m a self-made man with a fleet of ships at my command. I’m clean, healthy and have all me own teeth. I’m loyal to me friends and I’ll be loyal to a wife. I reckon that makes me equal to some of your fine English gents.”

“I suspect it does, Mr. Flynn, and better than many. And being a friend of my nephew, I suppose you expect me to introduce you to the finest young ladies in London, do you?”

He flashed her a grin. “I don’t expect anything, m’lady, but that would be grand.” He bowed over her hand and kissed it.

She laughed and waved him away. “You left something off your list of attributes, Mr. Flynn.”

“Cheek. And a measure of raffish charm.” Lady Beatrice grinned and clapped her hands. “I’m so pleased Max sent you to me. Mr. Flynn. I adore matchmaking.” 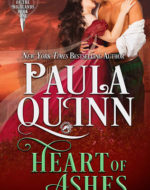 Review: Brazen and the Beast by Sarah MacLean
« The Wicked We Have Done by Sarah Harian
Review: How to Seduce a Vampire (Without Really Trying) by Kerrelyn Sparks »