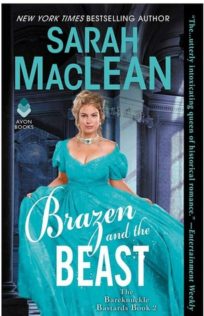 Brazen and the Beast (The Bareknuckle Bastards, #2) by Sarah MacLean

When Lady Henrietta Sedley declares her twenty-ninth year her own, she has plans to inherit her father’s business, to make her own fortune, and to live her own life. But first, she intends to experience a taste of the pleasure she’ll forgo as a confirmed spinster. Everything is going perfectly... until she discovers the most beautiful man she’s ever seen tied up in her carriage and threatening to ruin the Year of Hattie before it’s even begun.

When he wakes in a carriage at Hattie’s feet, Whit, a king of Covent Garden known to all the world as Beast, can’t help but wonder about the strange woman who frees him—especially when he discovers she’s headed for a night of pleasure... on his turf. He is more than happy to offer Hattie all she desires... for a price.

Soon, Hattie and Whit find themselves rivals in business and pleasure. She won’t give up her plans; he won’t give up his power... and neither of them sees that if they’re not careful, they’ll have no choice but to give up everything... including their hearts.

This is an normal box

Author Sarah MacLean was part of the podcast discussion at the recent RWA and they were discussing her most recent novel Brazen and the Beast. It sounded very interesting but I was too late for a review copy since it had just published. So I told myself that I had to wait for it go to on sale and then I would pick it up since I have so many books already. That lasted for about two hours and then I was online purchasing a copy. I then told myself that I needed to knock off a few review books before I read this one. That lasted until the next day when I was between books and somehow I selected Brazen and the Beast. Apparently I had no control over myself.

Brazen in this story is Lady Henrietta Sedley. Hattie is turning 29 and she is tired of everyone deciding her life for her. So she has decided that 29 was going to be the Year of Hattie. She was going to convince her father to give her the family’s shipping business since her brother was an idiot with no idea how to run the business. She would make her fortune, buy herself her own home and finally convince her father to give up any ideas of marriage. Hattie knows that at 29 she is well and truly “on the shelf” but she was also aware that even before her age became a factor, no man wanted a tall, pudgy wife with a better head for business than he does and one who isn’t going to sit back and be quiet about it.

So the first thing on Hattie’s list of things to do is ruination. Hattie has found out about a brothel which caters to female clients. She has made an appointment to lose her virginity. Once she is ruined, she can begin the Year of Hattie and move on with her life as powerful spinster.

But apparently before she can get to her appointment at the brothel, she has to do something about the man tied up in her carriage. Hattie can tell by the very badly tied knots that her brother had something to do with the man in her carriage, but since the man is not dead, it shouldn’t be wrong to ogle him just a little. He is truly handsome and once he wakes up, quite pissed off. Except pissed off or not, she still needs to get him out of her carriage…Year of Hattie and all that.

So Hattie unties him and gives him a push out the door (well, they were slowing for a turn for goodness sake), but not before she gives in to a little indulgence and gives him a kiss.

But Hattie should have put more consideration into who might be tied up in her carriage and why. Savior “Whit” Whittington is known as the Beast of Covenant Gardens for good reason. He is one of the Bareknucked Bastards and has no problem using his network to track Hattie’s carriage to take the place of her escort at the brothel. Beast wants the name of who put him in the carriage and stole his shipment of goods and Hattie wants a night of passion. Hattie won’t turn over her brother to the Bastards, even if he is an idiot, but she is willing to reimburse the Beast for his losses and if they can come to an arrangement to get rid of her virginity, all the better.

Whit’s father was a bastard, making him and his brother’s battle for his title. Anything Whit loved was used against him. He only, ever wanted to protect his brothers and his mother from his evil father. When danger comes for Hattie, he will do anything to protect her but he refuses to love her.

I liked how strong Hattie is. Part of that is because as a large girl, she was overlooked by most of the eligible bachelors and she has long since given up on any dreams of a husband and children of her own so she focused on her brains and her love for the ships that her father would let them play on as children.  I also like that when she finally has a chance at that dream with Whit, she turns him down because he won’t say that he loves her (we know he does by his action and his thoughts).  She could simply grab at the life with the man she loves but she decides that she deserves it all.

This is the second book of the series and we do get glimpses of what happened with Whit, his brothers. a sister, and his father but I don’t think the first book had the whole story of their youth.  I think a big part of the final story will be exactly what happened between them all (just my guess).  I believe this next story will feature the brother who won the Duke’s title and the sister (not  a blood sister) who he fell in love with.

I liked the characters and will be on the look out for the next book.

He did not hesitate. “I believe it.”

She ignored him. “And not just the books. Not just the customers. All of it. The men on the docks need Sedley Shipping to keep their hooks working and pay them well. The men who load the warehouse. The drivers who deliver the cargo. We employ a small army and I know them. To a man. I know their wives. Their children. I–” She hesitated. “I care for them. All of them. All of it.”

She was growing more frustrated, and he understood it–the anger and the worry and the pride that threaded through her. He felt it himself when he stood in the Rookery, where he and Devil and Grace had built a world for people whose loyalty repaid them in spades. This woman loved her business, just as Whit loved his. She loved the Docklands just as Whit loved the Garden.

They were a match.

“You are better at it than most of the men in London.” He didn’t have to see it to know it.

“I can tie a sail in a high wind,” she added, “And bandage a knife wound–thank you very much for nearly killing my brother, by the way–and fix any problem that possibly arises–including the one where my idiot brother went up against two of the most powerful men in London. But it isn’t good enough.

Now that she had started, she couldn’t stop, and Whit found he didn’t want her to; he wanted her to go on. He’d listen to her rage forever, even as his mind was already working to change it. To fix it. To give her what she wanted.

Impossible, if he was to do what was necessary.

She was still talking. “It’s supposed to be mine. It’s supposed to be mine and not simply because I want it. God knows I do–all of it. I want the inkpot and the ancient balance sheets and the rigging and the resin in the hold and the sails. I want the freedom.  But more than all that…I earned it.” She paused for breath and a vision flashed, ink stains on her writs in the brothel. Proof of her passion, as though the way she fairly vibrated before him now was not enough. “And do you know what my father said?”

“He said you are a woman, so you cannot have it.” It was bollocks.

“He said I am a woman, so I cannot have it,” she repeated, narrowing her gaze on him. “My being a woman shouldn’t stop any of it.”

She was ramping up again. “I’m so damn tired of being told it should. Being told I don’t know my own mind. Being told I’m not strong enough. Not clever enough. I am.”

“Yes.” Stronger than any muscle in the Garden.

“I’m exceedingly clever. I know a woman shouldn’t say such a thing but, dammit, I am.”

“The fact that I’ve different”–she waved a hand over her body–“bits…shouldn’t matter. Especially since these bits…” She trailed off. Shook her head. “Anyway.”

He wouldn’t trade her bits for anything. “I agree.”

The words thieved the winds from her sails, leaving her breathing heavily in the darkness. “Oh.”

He supposed he should have seen as much before. Should have understood it. She wanted Sedley Shipping. She wanted the boats and the docks and the world, and she should have it. “I have no difficulty believing that you can run that business better than them.”

His lips twitched at her soft grumble. “From what I hear, there are some very intelligent cats on the docks that could do better than your brother. I was speaking of your father.”

“Well, he did it so well they gave him a peerage.”

“I am unimpressed by peerages.”

She met his gaze. “I shouldn’t have said what I said about you. I am sorry.”

He wasn’t about to allow that. “You called me handsome. You cannot take that back.”

“What would be the point? It’s empirical.”

He knew he was handsome; she wasn’t the first woman to say it to him, nor the hundredth, and yet, hearing it from her was different than hearing it from the others. As though he’d earned it from her in some way. Impossibly, heat spread across his cheeks again, and he was very grateful for the darkness. If the boys in the Garden knew that the unflappable Beast had blushed twice this evening, he’d never get another ounce of respect. He cleared his throat. “Thank you.”

He should return her to the house, this woman who had rescued him and hadn’t asked him for explain. Hadn’t even lingered on the events inside. Instead, she’d told him about the last, miserable dance she’d had. And he’d told her nothing.

He didn’t want to bring her in. He wanted to tell her something. “I think you would like my sister.”

Hattie froze at the words. “I didn’t know you had a sister.”

“There are many things you do not know about me.”

“If only there were some way you could tell me such things. Some kind of verbal communication you might attempt. Turning all your growls and grunts into discernible words. A spoken language of some kind, complete with meaning.”

He grunted his amusement, and she smiled.

Audiobook Review: How to Train Your Highlander by Christy English