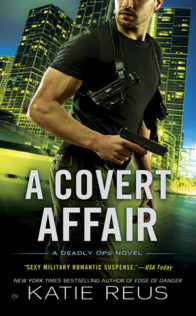 [box style=”rounded” border=”full”]Although I didn’t fall under the spell of Nathan and Amelia as much as I did with the cuter romance of Tucker and Karen in the last book, the story plot contained some unexpected twists that kept your focus on the investigation. [/box]

Wesley Burkhart, the head of the NSA, received a call from an associate in Miami indicating that one of his tenants has disappeared, leaving only a typewritten note and more money then she usually has on hand to cover the rent. She also quit her job by letter and cancelled her cell phone.  No forwarding address and no way to contact her.  Normally, a paid tenant leaving town in the middle of the night wouldn’t be cause for concern but with no family, this young woman would often have dinner with Matias. She wouldn’t have left town with only a curt note. Matias has been investigating on his own and has found fifteen other women who have disappeared off the face of the earth, leaving only typed notes and cutting off any means of contact.

His investigation also found that these women all have no family or close contacts, and one thing all these women have in common is the Bayside Community Center. Burkhart knows that Maria Cervantes runs that center and there is no way she would have anything to do with harming young women.

Missing women is not normally an NSA problem, but is it possible that someone is taking over the slave trade in Miami after the NSA just took down Paul Hill.  The possibility that someone would be using profits from selling these women to fund terrorist activities gives Burkhart the perfect excuse to send an agent down to Florida.   When the number of missing women starts to exceed 50, the pressure is on to find these women before it is too late.

Nathan Ortiz has just recovered from injuries received in a terrorist attack and he already has an alias in place in Miami. “Miguel” Ortiz is a shady character looking to get into to smuggling and he is going to hit up contacts old and new to find out who might be selling women.

Nathan might have healed from his injuries but that doesn’t mean that he is ready to go face to face with the woman who broke his heart when he was only 17, the woman he could have spent his life with, and the only one he thought of when he thought he might die.   Nathan is no longer a kid and he has no intention of walking away from Amelia ever again. When the NSA wants Amelia’s assistance to get closer to one of the prime suspects, a man who has been trying to date Amelia for some time, Nathan is going to stick close and keep Amelia safe.   Nathan will do everything he can to make sure Amelia stays safe and stays his.

THOUGHTS:
This one really kept you guessing who was involved and what was happening to those women. It was a interesting investigation and had a different twist to the ending.

Romantically, we started off very well. Amelia and Nathan were high school sweethearts and had a long history together from their neighborhood. Nathan’s plan was to go into the army and Amelia simply wanted to get away from her prostitute mother and make a name for herself. Amelia broke off things with Nathan so that they would each move on to the future they had planned. When they initially got back together, they sizzled. It was as things progressed and they started talking about the past that they both started lamenting the past and got that teenage angst going on again of “I think I like her more than she likes me.” and “I don’t know if he will forgive me and stay.” Both started off with “I am not letting them go ever again” to a suddenly wishy-washy “I don’t know how they feel about me.”   Where Amelia and Nathan started off strong with a past history as lovers and instant rekindling of their passion, they then took a detour and the long-road to get back to that spot before the end of the story which kind of ruined the romance for me since they were both strong personalities and the wishy-washy seemed out of character for both of them.

I am going to pick my next action romance more carefully. The last several have all involved women being abducted, shipped out of the country and sold into sexual slavery. I am outlawing any future talk of spring break in my house and have considered getting those tracker anklets that they put on prisoners under house arrest for my kids. If the dogs can get trackers, then the kids can get them too, even if I have to take them to the vet to get it done. I really need a break from human trafficking stories or soon I won’t be able to sleep at night. 🙁  I need to find a nice quiet vampire story.

Aside from my own personal nightmare, it was a good investigation and it kept you guessing.

In another pan she was browning beef and adding all sorts of spices, including something that looked like a green chili sauce. His mouth watered at the scents. When she started pulling out the tortillas and piling them with meat and cheese before rolling them tightly, he realized she was making enchiladas. One of his favorites. She remembered.

“You need any help?” he asked when there was a lull in their conversation.

She laughed lightly. “No. You evidently haven’t looked in the mirror, because you look as if a harsh wind could knock you over. Sit and let me do this for you.”

Her words warmed him inside. “Is it weird that I think it’s hot when you boss me around?”

Her gaze snapped up to his, her blue eyes darkening with unmistakable hunger. He was hungry too and not for food. This whole domestic scene should throw him off balance, but he liked being here with Amelia, in the quiet of her kitchen.

“I can take bossing you around to a whole other level if you’d like,” she murmured as she rolled the tortillas tightly. She did so with practiced moves, laying them seam down in a greased glass pan.

Heat flared inside him at the unexpected, sexy statement. “Yeah?” He’d never given up control in the bedroom before. The thought of doing so was a little intriguing. But only with her. Maybe not even then.

“Oh yeah.” Her voice was full-on sex kitten now. His cock ached at the sound. “Mow my lawn, Nathan,” she purred in a seductive voice. “Vacuum my floors, dust my house. Make everything shine. Faster, harder, you missed a spot.” Her mouth pulled up into a wide, mischievous grin as she sprinkled cheese and sauce over the top of the tortillas. “Is that the kind of bossiness you were thinking about?” she asked as she slid the pan into the oven.

To his surprise a laugh erupted from his chest. It loosened something inside him, something he hadn’t even realized was trapped. After the day he’d had, coming to see Amelia had been the best decision.

He still wanted to know what the hell had gone wrong between them but sitting here with her felt so damn right it scared him. She had the power to rip him apart. He should just walk away, but he was already in too deep and like an addict, he couldn’t seem to get enough of her.