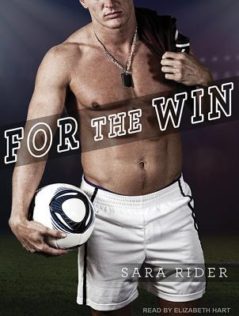 For the Win by Sara Rider, Elizabeth Hart

[box style=”rounded” border=”full”]I loved the energy in this book. Lainey’s excitement and dedication for the game rejuvenated Gabe’s love for it and Gabe showed Lainey how she could enjoy life as well as be dedicated.[/box]

I kept seeing promos for this one. I kept looking at it and finally grabbed an audiobook copy when it was offered to me for review. While it is a simple and sweet romance, I enjoyed the energy of the story as well as the characters.

Lainey Lukas is team captain of the Seattle Falcons, part of the newly established Women’s Soccer League in the U.S. It was Lainey’s goal that won the world cup for Team USA but Lainey never got to celebrate with her team. A collision with a member of the other team left Lainey with a severe head injury and she had to be carried off the field and hospitalized for several weeks.

Lainey will do whatever she must to make sure that the WSL is a success this time around. Soccer isn’t as popular as other sports in the U.S. and women’s soccer isn’t guaranteed to succeed unless they can fill some seats.

Gabe Havelak is Seattle’s hometown hero but at age 33, he is nearing the end of his professional career. When he sees that spunky Lainey Lukas having a problem with the press, he tries to step in but every time he attempts to help Lainey, it comes off looking like he is making fun of her. This leads to a challenge between Havelak and Lukas of who has the better team which unfortunately was captured on video and posted on the internet. Now in a put-up-or-shut-up battle of the sexes, the Falcons and the Surge will need to compete and the winner will get to play on the better field.

The heated competition is the most fun Gabe has had in a long time and being around Lainey Lukas and her determine to succeed is having quite the effect on Gabe. He is trying everything he can to keep the competition friendly because while he might want to make sure that his team doesn’t play on the cursed Cricket field, he is starting to want Lainey Lukas more.

THOUGHTS:
Although we don’t delve too much into the secondary characters in this story, the budding relationship between Gabe and Lainey is quite enjoyable. Gabe knows his years of playing are coming to an end and he doesn’t want to risk an injury and forced retirement from playing on the AstroTurf at Cricket field. Things get heated after his failed attempt to help Lainey who is very awkward with the press, but he really isn’t trying to hurt the Falcons. Lainey’s unyielding dedication to soccer rejuvenates Gabe’s excitement for the sport and Lainey’s cute, girl-next-door look doesn’t hurt his interest either.

Lainey has a list of things that she will accomplish after she wins the World Cup, which she did but she didn’t get to celebrate. The only thing is that it is a bucket list of boring things like get a haircut and eat some ice cream. Lainey is so focused on soccer and her training, she doesn’t to anything else. This makes it hard for her team mates to bond with her. Sadly Lainey has no friends. She was never been able to make time for that and it is not until she spends time with Gabe and learns to relax a little, that her team mates make the effort to bond with Lainey.

I thought it was interesting that the author presented the fact that while Havelak and the male soccer team had salary caps and endorsements, the women’s team mostly had second jobs and were supplying their own gear. One of the side bets between Lainey and Gabe was that if the women won, he would pull strings with his endorsements and get them some real gear.

This was a fun, lighthearted story. The players kept the competition in the fun zone and no one gets nasty with it. There is the usual “Gabe is a player and this will end and he’ll break my heart” drama, but besides that silliness and Gabe’s obsession with things that will cause bad luck, it was a sweet, enjoyable romance.

Narrator Elizabeth Hart did a nice job with the voices and bringing the characters to life.

Lainey slotted another ball into the top left corner of the net.

“Don’t know. I’ve never known anyone with aim like that before.” Lukas was his opponent, but damn if she didn’t make him and everybody else in the stands want to root for her. She had the kind of passion and fire that made everyone around her feel like no dream was unattainable.

“After twenty-eight shots, I’d say that kind of perfection is pretty nuts even by La Liga standards.”

“Don’t worry about it, kid, Aiden’s holding his own. Hard for anyone to stop a ball going sixty-five miles per hour,” Gabe said, referring to the winning number on the radar gun earlier that afternoon. He stretched out his stiff legs in front of him. The warm sun was starting to fade as the day went on. Gray clouds loomed on the horizon.

“Looks like he might be getting distracted. Check it out, Aiden’s macking on Lukas.” Johnny pointed at the pair, who were smiling and chatting cordially just before Aiden lined up for another shot.

A knot twisted in Gabe’s gut. What could those two possibly have to talk about? Sure, Aiden was good-looking, if you like California-Golden boys with perfect teeth and dreamy blue eyes. He didn’t peg Lainey as the type to fall for a Hollywood smile, but then again, what did he know? Every effort he made to have a civil conversation with her fell flat. Not that that made it okay. For cripes’ sake, Aiden had a pregnant fiancée at home. He didn’t need to be talking to another woman.

Aiden sent another shot ripping into the net.  Gabe forced himself to clap for his teammate instead of sulking.

“Hey, Lukas, how many times are you going to aim for the top left corner? It’s getting a little predictable,” Gabe called out as she walked past. “Why not shake things up a little, eh?”

She rewarded his comment with a blank stare but whispered conspiratorially to Aiden as she passed by. Aiden laughed and clapped her on the back before stepping outside the box. She lined up the shot as usual, paused, then removed her shirt once again. The crowd hushed as she rolled up the garment and tied it around her head so that she was blindfolded. Riveted, Gabe watched her rib cage expand as she sucked in a deep breath then took the shot.

“No way,” Johnny whispered in awe.

The ball zipped right into the top left corner, and the fans exploded.

Lainey removed her makeshift blindfold and walked straight to Gabe with absolute confidence her shot went exactly where she intended despite not having witnessed the execution. “Exciting enough for you, Havelak?”