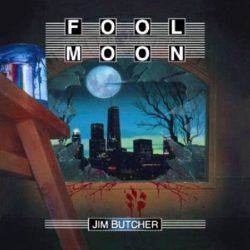 Business has been slow. Okay, business has been dead. And not even of the undead variety. You would think Chicago would have a little more action for the only professional wizard in the phone book. But lately, Harry Dresden hasn't been able to dredge up any kind of work magical or mundane.

But just when it looks like he can't afford his next meal, a murder comes along that requires his particular brand of supernatural expertise.

Book 2 was much better than Book 1 but again I split between the pluses and the minuses for this series.

In Fool Moon, when Kim Delaney, another magic user, consults with Harry about a complicated binding circle, Harry refuses to help and warns her away becausing she is not strong enough to hold anything requiring that difficult a binding.

Harry is brought in on a consultation again by Lt. Karrin Murphy of Special Investigations to investigate a murder of one of the goons of a local mobster in what looks like an animal attack. The local police aren’t the only ones investigating. The FBI have been called in as well, and the FBI are very…territorial. Murphy, as always, wants the information now, as tomorrow is too far away.

Harry is pretty certain it was a werewolf attack but he consults with Bob only to learn that there are several types of werewolves (Hexenwolves, werewolves, lycanthropes and loup-garou).  The most dangerous part of being a werewolf is how much of your humanity you lose, the longer and more often you change to the wolf.    Harry determines that at least one of the creatures running around is the most dangerous, the loup-garou, a cursed human who can only be killed by silver that has been gifted.  Gifted?  You can’t just go buy silver.  It has to be handed down to you from someone.  What if your people just aren’t generous that way?

When Kim becomes the next mauled victim, Harry knows that a loup-garou is involved. Harry is overwhelmed with guilt and anger that Kim attempted the binding it after he told her it was too dangerous and if she had only told him what she was doing, he could have stepped in.  Harry suffers from a serious case of what Atticus in the Iron Druid Chronicles would call “guilt ferrets.”   Harry breaks everything down to how it is his fault.  He tries to protect everyone from themselves and from all the things that go bump in the night and when he can’t, it is somehow his fault until he is overwhelmed with guilt ferrets eating at his brain.

What bugs me most was that once Murphy sees the failed binding circle at the crime scene, one she recognizes from a scrap of paper that Harry had the other night from his meeting with Kim.  Murphy’s all ready to arrest Harry once again jumping to the conclusion that Harry had to have had something to do with the woman’s death. Why, oh why, does Harry continue to work with Murphy? She is so clueless for being in charge of the Special Investigation department and she just keeps trying to pin crimes on Harry.

Most reviews that I have found (including a note from the author) indicated that Book 3 is a pivitol point in the series.  I will be back with my thoughts on that book.   But, just a warning before you jump into this series, I got 20 percent into Book 4 before I tossed in the towel on the whole Harry Dresden series.  I am certain I would have continued just because the narrator was so perfect but I was very unimpressed with Harry and his stories.

My favorite part of this series is Bob, the spirit that lives in the skull on Harry’s desk and helps him with spells…

Up on one of the shelves, huddled in the midst of a thick stack of hardbacks, was the bleached, smooth form of a human skull, its empty eye sockets gaping. Deep in those eye sockets, there was a flickering of orange light, which grew and solidified into twin points of lambent illumination. “Sleepyhead. Oh, that’s rich, Harry. With a sense of humor like that, you could make a living as a garbage man anywhere in the country.” The skull’s mouth gaped open the parody of a yawn, though I knew the spirit within, Bob, didn’t feel fatigue in the same way that living beings did. I put up with his lip, so to speak–Bob had worked for several wizards over the course of a dozen mortal lifetimes, and he knew more about the nuts and bolts of magic than I ever would.

“What are we doing, now?” Bob sniggered. “More weight-loss potions?”

“Look, Bob,” I said. “That was only to get me through a rough month. Someone’s got to pay the rent around here.”

“All right,” Bob said smugly. “You going to get into breast enhancement, then? I’m teling you, that’s where the money is.”

“That isn’t what magic is for, Bob. How petty can you get?”

“And,” Bob said, his eyes lights flickering. “The question is, how pretty can you get them? You aren’t a half-bad wizard, Dresden. You should think about how grateful all those beautiful women will be.”

I snorted and started clearing off a space on the center table, stacking things up to one side. “You know, Bob, some of us aren’t obsessed with sex.”

Bob snorted, no easy feat for a guy with no nose or lips. “Some of us don’t take a real, working body and all five senses for granted, either, Harry. When’s the last time you saw Susan?”

“I don’t know,” I responded. “Couple weeks ago. We’re both pretty busy with work.”

Bob heaved a sigh. “A gorgeous woman like that, and here you are, down in your musty old lab, getting ready to do more ridiculous nonsense.”

Bob grumbled something in Latin, but rattled a few times to shake the dust off of the skull. “Sure, what do I know? I’m just a pathetic little spirit, right?”

“With a photographic memory, three or four hundred years worth of research experience, and more deduction capacity than a computer, Bob, yeah.”

Bob almost seemed to smile. “Just for that, you get my best effort tonight, Harry. Maybe you’re not such an idiot after all.”

“Great,” I said. “I want to work up a couple of potions, and I want to know everything you know about werewolves.”

I blinked. “There’s more than one?”

“Hell, Harry. We’ve made at least three dozen different kinds of potions down here ourselves, and I don’t see why you wouldn’t–“

“No, no no,” I growled at Bob. “Werewolves. There’s more than one kind of werewolf?”

“Eh? More than one kind of what?” Bob tilted his skull over to one side, as though cocking an invisible hand to his ear bones.

“There wolf,” Bob replied solemnly, his voice seething with a hokey accent. “There castle.”

I blinked at him. “Uh. What the heck are you talking about?”

“It’s a joke, Harry. Stars almighty, you never get out, do you?”

I eyed the grinning skull and growled in frustration. “Don’t make me come up there.”

“I’m working another murder case, Bob, and I don’t have time to goof around.”

“Murder. Mortal business is so complicated. You never hear about murder charges in the Nevernever.”

“That’s because everything there is immortal. Bob, just shut up and tell me what you know about werewolves. If there’s a bunch of different flavors, tell me what they are.”

Review: Flight from Death by Yasmine Galenorn
« Review: The Kiss Quotient by Helen Hoang
Review: The Test by Tawna Fenske »