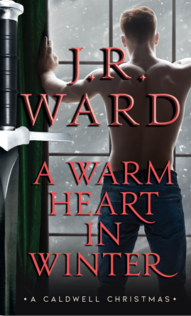 #1 New York Times bestselling author J.R. Ward is heating things up this winter with a holiday novel featuring some of her most iconic Black Dagger Brothers.
In this romantic and sexy addition to the #1 New York Times bestselling Black Dagger Brotherhood series, a beloved couple has everything arranged... until it all goes horribly wrong.
Blay and Qhuinn always intended to do a proper mating ceremony, but life has a way of getting in the way. With a pair of young, responsibilities to the King, and a grueling fighting schedule, the two are exhausted and overwhelmed. When Qhuinn gives his male the proposal of a lifetime, however, they are excited for their special night and more in love than ever.
Everyone in the Black Dagger Brotherhood’s mansion gets into the preparations, and the after party takes on epic- and immortal- proportions when Lassiter forms the Party Planning Committee. The celebrations promise to be all that the couple deserves... until a Nor’easter land locks Caldwell in a fierce storm, and things go from lighthearted to deadly dangerous.
Battling nature and responding to emergencies, Blay and Qhuinn get separated, and when a catastrophic chain of events puts one of their lives in jeopardy, the night they had so looked forward could mean the end of everything...

A Blay and Qhinn story convinced me to jump back into this series.

Blaylock and Qhuinn have had a long and complex history. They have been friends since before their transition. While Blay was loved by his parents, Qhuinn was rejected by his parents because of his deformity (one blue eye and one green eye).   Qhuinn was raised like an unwanted orphan and he mostly watched his parents dote on his older brother and sister from the window of his room in his second-hand, threadbare clothes, until the day they finally tossed him out of the house and removed him officially from the family records. The only thing that kept Qhuinn from giving up on life was his friendship with Blay.

But along this journey not everything was puppies and rainbows between these two best friends. Blay was obviously in love with Quinn since they were teens but Qhuinn, always treated as an unwanted freak and outsider in his own family, was not ready to accept that he was also gay.  For many years, Blay had to watch Qhuinn on his nightly sexcapades with strange women. And for awhile Blay gave up on his dream of being with Qhuinn and was in a relationship with Qhuinn’s cousin, Saxton.   Then Qhuinn fathered the twins, Lyric and  Rhampage with one of the Scribe Virgin’s Chosen. Layla, complicating his relationships with everyone.

Qhuinn and Blay had a rocky relationship for many years until Qhuinn was finally ready to admit that his feelings toward Blay were so much more than friendship, but even after all this time as a couple, you still saw that Blay struggled and had moments of doubt about Qhuinn’s feelings and Blay’s place in Qhuinn’s life. They are mates but they never had a mating ceremony. Blay fears that Qhuinn might simply change his mind at any point and walk away from him. I imagine most of that had to do with the fact that it took Qhuinn so long to accept the love that Blay has offered to him.

A blizzard hits Caldwell and things the mansion go sideways which has everyone distracted by power outages, broken windows and falling trees.    While chaos reigns and everyone is running around trying to make the mansion safe, we lose a member of the household.

View Spoiler »Suicide and how it effects those left behind are a big factor in this story. How those who are suicidal can’t see past the pain they are in and how life could change if they hold on. There is also discussion of how the characters in the story could have reached out more and if it could have been stopped or would it only have been accomplished another way. This is a touchy subject and it might upset some who have been closely effected by a suicide. « Hide Spoiler

Even though we don’t see too much of him in this story, I feel the most for Lassiter in what happened.  Since the fallen angel has taken over for the Scribe Virgin, Lassiter knows that is coming and even he says that he is bound by some rules, one of which is not to interfere with fate. In many ways, Lassiter makes it harder on himself spending so much time with the Brothers and their families. As he builds a personal connection with all of them, it must be so much harder to know when something bad is coming and not being able to intervene or even give a warning that might stop something bad happening to these people he cares about. The Brothers are as close to a family that he has and yet he can’t interfere and even nudge them in a way to keep them safe.

I am a few books behind on this series and while things have changed a smidge, it was nothing that I couldn’t follow along on. Even though I do have some issues with the worldbuilding in the BDB universe, there are a few characters in this series that I really like such as Rhage and Mary and Blay and Qhuinn and need to pick up a book to find out what is happening to them.

Qhuinn pulled out a stool and arranged Blay like you would a potted plant: He saw a flat place and put something on it.

Blay wasn’t inclined to argue. At least not with the ass support. “I thought we weren’t drinking tonight, though.”

“We’re not drinking. This is medicinal.”

Two shot glasses were outed, and then came the I.W. Harper’s. Qhuinn’s hand wasn’t completely steady as he poured a splash in each, and that was not what you wanted to see in your mate–but when you were quaking in your own boots, it was nice to know you weren’t alone with our shimmies.

As all kinds of talk bloomed out in the foyer, they did the shot together, and Qhuinn doled out another.   After the two, they stopped and put the glasses in the sink–

That was when Blay heard the whistle. Or at least…he thought he did.

It was hard to tell because there were so many voices in the echo chamber around the grand staircase, people burning off their adrenaline with are-you-sure-you’re-okay conversations.

Looking to the open pocket door that led into the library, Blay closed his eyes and ordered his ears to sift through the other bird-like sounds the wind was making as it winnowed through the nooks and crannies of the front of the house–as well as the big-as hole some tree had made in the back.

“What is it?” Qhuinn asked.

Blay got off his stool and proceeded over to the pocket door–oh, shit. A pointy evergreen the size of the one the Big Apple put up for the holidays at Rockefeller Center had barged in through a set of French doors, bringing with it snow and cold and all kinds of outdoor.

Not exactly a redecorating job that went with the priceless books and the wonderful old rug.

“Well,” Qhuinn hedged, “at least we don’t have to cut down something to drape the garland and lights on.”

“So that’s what was chasing Rhage and Butch–“

The shout outside was muffled, but distinct enough.

Blay rushed forward, but not to the tree, to the other banks of French doors, which were still shut and locked. As he yanked open one set, more of the cold rushed in, but he didn’t pay attention to the deep freeze.

In the security lights, he saw the two figures, one back-flatted in the snow, the other crouched down and pumping a chest.

Blay pivoted and shouted, “Medic! We need a medic!”

Then he and Qhuinn were out in the storm. Z was the one doing the compression, Balthazar the person in cardiac arrest.

“Do you need me to take over?” Blay asked as he fell to his knees.

“You breathe for him when I say so. Three… two… one… breathe.

Blay pinched Balz’s nose, sealed the male’s lips, and pushed oxygen into those lungs. When he backed off and took another deep inhale, he smelled the burn. Skin…and something metallic.

He’s not dead, Blay told himself. He can’t be dead.

Blay went back down again, forcing air out of his own lungs and into the other male’s. Beside him, Qhuinn had taken Balz’s hand and was rubbing it. Or maybe praying over it.

“Where are they?” Blay said as he wrenched around. “Medic!“

Jesus Christ, the fighter was dead–

Without warning–because hey, nothing was coming with any warning tonight–Balz arched back and hauled in a breath so big, it was as if he has been animated by an outside force, some dark magic rushing through him and bringing him back to life.

The male’s eyes popped wide, and the dilated pupils focused upward. Then the head swiveled toward Z.

In a voice that sounded all wrong, Balz said in the Old Language, “She is here. The demon is back.” 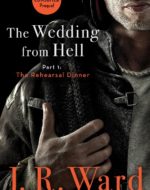 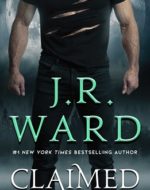 One response to “Review: A Warm Heart in Winter by J.R. Ward”