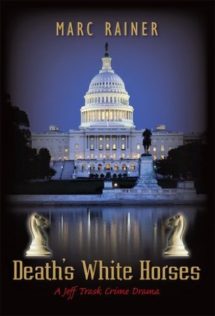 In "Capital Kill," he went after a ruthless local serial killer. In "Horns of the Devil," he faced some of the deadliest gangs in the western hemisphere. Now federal prosecutor Jeff Trask is back on the case, after a series of drug overdoses places investigators face to face with Los Zetas-the most dangerous of the Mexican drug cartels.

What begins as an investigation of local heroin trafficking soon turns into something far more serious. The cartel will do anything to protect its cash flow-including a series of attacks against Trask's team that cement Los Zetas' status as one of the most ruthless criminal organizations of the century.

Inspired by actual events from Mexico's cartel wars, "Death's White Horses" is Marc Rainer's third book featuring federal prosecutor Jeff Trask. While showcasing the challenges faced by law enforcement on both sides of the border, it also highlights the deadly consequences seen on either end of the US-Mexico drug trade.

With more than three decades of experience as a federal prosecutor, Rainer combines the excitement of a high-stakes thriller with the pinpoint accuracy and realism that has earned him a widespread audience in the field of law enforcement.

The death of a powerful Senator’s daughter is only the beginning of a line of victims in this newest novel by Marc Rainer. We soon find several dead prostitutes from overdoses of a new, stronger brand of heroin which is now being manufactured in Mexico. While Jeff and his team try and locate who is distributing this newest drug to the City of Washington D.C., we also are brought directly into the battle in Mexico between their Marines and the various cartels who are fighting for dominance of the drug trade.

Major Luis Aquilar and his team are trying their hardest to save the innocent people who are getting caught up in the fights between the cartels. They also need the fight against their own police and prison officials who have been bribed or threatened into the pockets of the local drug lords.

This is a fight being fought on each side of the border, in Mexico with guns and in the United States with laws, as both try to win a war against the drug dealers as well as the suppliers.

THOUGHTS:
In this latest novel, Marc Rainer proves to us that there are no victimless crimes. Every cellophane baggie of drugs purchased in the United States is covered with innocent blood. Maybe you can’t see it, but it certainly is there. The cartels in Mexico (and certainly elsewhere) are only concerned with production, distribution and profits. That can mean fighting for routes and clientele in gun battles between the various groups for control of a region, and innocent bystanders be damned.

While this was a intriguing story, where this story lacks in my opinion is that Marc pulls some punches in his story telling this time. What I love/hate about this author is that he puts his characters directly in the line of fire and not everyone walks away. So we end up with a personal stake in each case where we might lose an important member of our team. In this case, while Jeff and his team are investigating the overdose death of a Senator’s daughter and several prostitutes due to a very strong new batch of heroine coming out of Mexico, there is no real direct threat to them for most of the investigation. Half of this book takes place in Mexico with Jeff’s counterpart, Major Luis Aquilar, the leader of the Mexico’s Marines in his fight against the cartels. The strongest point to be made in this story is the daily danger to the poor people living among the drug cartels. Unfortunately, what is happening in Mexico is mostly told in third person reports to Aquilar as he arrives at the various town and sites of carnage. Marc would have made more of an impact in this part of his story in tossing in a stronger first person view of more of the attacks.

Case in point, there is a scene which is described that the cartel abducted three busloads of people trying to get to the U.S. border and diverted them to a town. The cartel then separated the young men from the older men and made the young men fight gladiator-style with machetes and hammers. The winners were then given a choice to join the cartel or be killed. The older men were made to lay down in the road and were crushed to death by one of the buses. The younger and prettier women were taken to the surrounding buildings to be raped and then murdered. This would be had far more impact to the reader if told in a first person by, for example, the one surviving female who was being kept by one of the cartel members, and by making one of the young men made to fight her husband. By telling most of these incidents in a third party report, or through the eyes of the perpetrators, we lost the fear, pain and personal attachment to the crime being inflicted and we could separate ourselves from the horror of what was happening.

By narrating these attacks in a third person narrative, Marc has taken away the usual aspect of danger which keeps the excitement level high in his previous stories. More often than not, I hear people talk of international incidents and there is always someone who suddenly doesn’t care when they find the devastation is not here in their own backyard. I believe a little shock value which would have gone a long way in hammering home the point in this story that what we are doing here in the United States (buying the illegal drugs) has far reaching detrimental effect on some innocent person who has lost their home, their family or their life for your victimless crime and just because they are not a face you see every day, doesn’t make their death any less horrific.

It was an interesting story and although I generally don’t want horrific details shoved into my brain, this story kept us back a little too far from the reality of the violence which is happening to truly make the impact that I think Marc Rainer was going for in his narration.

“There were two survivors. One younger man, one woman. Their stories were consistent, both with each other and with the three Zetas who were willing to talk after we arrested them and applied some persuasion. The victims were on buses headed for Reynoso. The buses were diverted from the main road by Zetas who blocked the highway with SUVs. They were holding automatic weapons, probably assault rifles. They boarded the buses and forced the drivers to drive to the ranch here. The men were split into two groups. Those that appeared to be able-bodied were paired up and forced to fight to the death, gladiator style, using sledge hammers and machetes. The survivors were invited to join the Zetas. Those that agreed to do so were spared. Those that refused were shot.”

“What about the others?”

“The older men and those who appeared to be sickly were bound and forced to lie on the roadway. A Zeta then held a gun to the bus driver’s head and forced him to drive the bus over them. After he did so, he was shot as well. Some of the women suffered the same fate. The prettier ones were taken to some of the buildings where they were raped first. Then they were shot as well. One of the survivors was being kept by a Zeta for more abuse, but we found her before she was killed. The dead were pushed into these pits and covered up.”

Aquilar shook his head. The smell of decomposing flesh still hung in the air even though the last of the bodies were removed. “How many Zetas have you rounded up?”

“More than eighty.” Torres looked at the ground before returning his gaze to Aquilar. “I have to confess something, Major. After first speaking to the witnesses, we were able to arrest about forty Zetas. They were spread throughout San Fernando, sleeping drunken thugs occupying deserted homes. I had our men form a circle, and I told the Zetas to pair up inside the circle. I had them strip naked, and told them that they were going to fight to the death with their bare hands, and that only the winners would be allowed to survive. I told them that the survivors would then have to rape each other, and that any who refused would be shot.”

Aquilar stared at his subordinate. “Did that happen? Did you force them to kill and rape each other, Capitan Torres?”

Torres shook his head. “No, sir. I fired one shot to command them to start fighting, but fired another and stopped it after a few seconds. I’m sorry, Major. I was blinded by anger, and just wanted those degenerates to experience some of the same terror they’d caused.”

Aquilar nodded. “At least you stopped it before you completely lowered yourself to their level.” He looked around the pits, smelling the stench. “If I had been here a few days earlier, I might not have stopped it myself.”