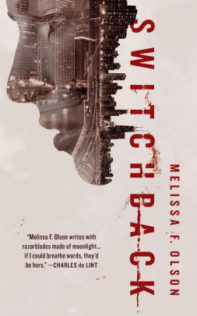 The Bureau of Preternatural Investigations returns in Switchback, the sequel to Melissa F. Olson’s Nightshades.

Three weeks after the events of Nightshades, things are finally beginning to settle for the Chicago branch of the BPI, but the brief respite from the horror of the previous few weeks was never destined to last.

The team gets a call from Switch Creek, WI, where a young man has been arrested on suspicion of being a shade.

The suspect is held overnight, pending DNA testing, but seemingly escapes in a terrifying and bloody massacre. But is there more to the jailbreak than a simple quest for freedom?

The second book in this series, while still short, manages to give us an interesting story and begins to build the characters.

My complaint with both the first and second books in this series is that they are very short. The audiobook narrations are just over 4 hours. The first book was laying down the world building, introducing characters and attempting to give us an FBI investigation. It was too much in such a short time, although the introduction of vampires was intended to be vague since we only just found out they existed. I presume that the learning curve will be part of the entire series.

The second book does what I hoped it would do, and begins to build on the characters in a very natural way as the story develops and just like you would if you were meeting new people.

Now that the world has accepted that shades (vampires) are not a youtube hoax or government lie, several states are creating fear-based laws so they have cause to arrest any shade they can find, such as the recent Wisconsin law that makes drinking blood illegal. When the first arrest is made in a small town of Switchback, the entire police force is found murdered in what looks like a shade retaliation.  The FBI division of the BPI, Bureau of Preternatural Investigation, lead by Special Agent Alex McKenna is sent in to investigate and determine if this was truly a shade attack and if so, does it has anything to do with Hector and the abducted teens a few months ago.

As they investigate the attack on the police force, we start learning more and more about Alex McKenna and the rest of the BPI agents, as well as more about Lindy Frederick, who is a shade working with the BPI. The agents, while still leary of Lindy, start to realize that she will not harm them and they begin to accept her as one of them as the story builds.

The story was very enjoyable and well laid out to blend the investigation and character building and left me wanting more.  That is the problem with reading back to back stories.  It is just a shame that there wasn’t more to it. The next book is due out sometime in May and I will definitely pick up the audiobook to enjoy more of Luke Daneils’s captivating narration.

Older shades can go out in the daytime but they are as weak has humans during the daylight.  Lindy can feel exactly when the sun sets.

“Oh,” Lindy felt it then, the thick awakening of every part of her body. She took in a breath she no longer needed and opened eyes she didn’t remember closing.

“What?” Hadley echoed, looking in the rear view mirror.

“We’ve just never been this close to you at sunset.” Ruiz mumbled. He was actually blushing.

“Do I really look that different?”

“Um, you look kind of…” Alex seemed at a loss. “I mean, not that you weren’t attractive before, but, um. Hadley, bail me out.”

Smiling, Lindy stetched, as much as she could in the backseat, and took in a breath throught her nose taking in all their familiar scents, but there was something else in the car, too. Surprised, she looked across the seat.

Still blushing, Ruiz reached into his coat pocket and pulled out a small bag of O negative.

“You charming bastard,” Alex marveled. “You stole a blood bag for her?”

“Yeah, well, apparently the cops in this town like arresting shades,” Ruiz said defensively. “I didn’t want her getting caught and having a whole incident. Oh, here.” He reached into the pocket again and pulled out a paper-wrapped drinking straw. “I mean, I don’t know how you usually do it,” he mumbled.

Lindy beamed at him. She was genuinely moved by the gesture, even if cold bagged blood tasted like wood chips.

“Thank you, Ruiz,” she said, poking the straw into the bag. She slouched in her seat and turned toward the window. “Keep talking so I don’t feel weird,” she ordered.

“Okay, people, back to the case,” Alex said, straightfaced. “Nobody stare at Lindy while she attends to her body’s needs.”

Ruiz snorted. “This is like when you’re on a stakeout and your partner has to pee in a bottle.”

Lindy really wasn’t listening. She could get sustenance out of bagged blood, but that meant forcing herself to down it when her gag reflex was suggesting it would be better to puke it up and start over with living blood. Lindy plugged her nose and choked it down as fast as she could. Then she clapped her hand over her mouth and held it there waiting for her stomach to stop trying to upchuck.

Alex saw the look on her face, “So, not delicious then?”

She shook her head, not confident about taking her hand away.