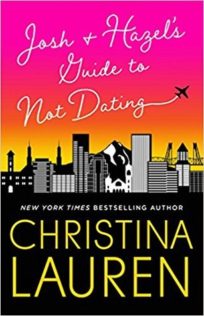 Josh and Hazel's Guide to Not Dating by Christina Lauren

Hazel Camille Bradford knows she’s a lot to take—and frankly, most men aren’t up to the challenge. If her army of pets and thrill for the absurd don’t send them running, her lack of filter means she’ll say exactly the wrong thing in a delicate moment. Their loss. She’s a good soul in search of honest fun.

Josh Im has known Hazel since college, where her zany playfulness proved completely incompatible with his mellow restraint. From the first night they met—when she gracelessly threw up on his shoes—to when she sent him an unintelligible email while in a post-surgical haze, Josh has always thought of Hazel more as a spectacle than a peer. But now, ten years later, after a cheating girlfriend has turned his life upside down, going out with Hazel is a breath of fresh air.

Not that Josh and Hazel date. At least, not each other. Because setting each other up on progressively terrible double blind dates means there’s nothing between them...right?

Delightful and delicious. Never have bad dates been so much fun!

For Hazel, life is for living to its fullest but she also learned at an early age that not everyone likes or appreciates her level of zeal.  Hazel is just like her mother and Hazel’s world tilted on it’s axis the day her father told her mother to act like a normal person. It never stopped Hazel from doing things that she feels compelled to do or say, but since that moment, Hazel has tried to surround herself with people who — okay, maybe they don’t always appreciate her antics, but they accept Hazel the way she is.

Unfortunately, Hazel too has had her share of boyfriends who love her zaniness for awhile, but once they realize that Hazel never hides who she really is, they walk away from her.

When Hazel realized that her friend Emily’s brother is Josh Im, the boy who Hazel always saw as perfect in college even after she puked on his shoes, she is determined that she and Josh will become BFFs. It is a good thing since Hazel’s apartment becomes flooded and she needs to find a place to stay and Josh just happens to have an extra room…and a whole lot of patience. So in the next few weeks of living together Hazel gets her wish and she and Josh become the best of friends. So much so, that she convinces him that they need to double date in order to each find some romance.

But it seems that the more they double date, the more they realize that they are simply going out to spent more time with each other.

In this story, Hazel is the friend you have always wanted, the one who will drag you outside of your comfort zone kicking and screaming if necessary, but there is no way you won’t have fun with Hazel leading the charge.

Hazel and Josh are absolute polar opposites but they fit perfectly together like puzzle pieces.  They make the perfect couple.  It is the fearless Hazel that hesitates to act on her growing attachment to Josh.   Hazel still sees Josh as the ideal man and her biggest fear is that someday he would look at  her like her father looked at her mother and it would break her.

Josh and Hazel’s Guide to Not Dating is a sweet romance  and you have a delightful time experiencing  Hazel’s quirky look at life.

“Hello, everyone!” he shouts, to surprisingly lively applause. “Some of you may recognize me from Channel Four Weekend News. My name is Richard Stroker, and I am your host for tonight’s game.”

“Richard Stroker?” Hazel gapes at me from over the top of her drink. “His name is Dick Stroker? I knew tonight was going to be awesome.”

Adam blinks at her side, confused. “I don’t get it.”

There are about a hundred unsaid things in the look she gives me before she returns her attention to Dick.

“We’ll play seven rounds tonight,” Dick says. “Pop culture, music, math and science, world history, sport” — Adam does a little fist pump here –“wildlife, and grammar.” A collective boo moves through the crowd at the last tone, but he continues. “You’ll notice several large television sets around the bar–courtesy of Bob’s Sports, thank you, Bob–where the questions will be displayed. Everyone should have seven scorecards, each one labeled with its respective category. We’ll score each category individually and then tally them for a cumulative winner at the end. Who wants to know what we’re playing for?”

I laugh when Hazel’s arm is the first to shoot up.

“Third place will receive a set of new steak knives from Kizer. Kizer: Because Chinese knives can be awesome, too. Our second-place team will win a year’s subscription to Omaha Steaks, valued at over three hundred dollars.” The room fills with the collective ring of ooohs and ahhhs. “Our last prize is a big one, folks. Because all the proceeds of tonight’s game go to the Children’s Cancer Fund, Budget Cruises has generously donated a three-day Pacific Coast cruise!”

While Cali and Adam are listening to the rules, Hazel leans across the table. “You have to be on my team.”

“In case you haven’t noticed,” I reminded her, “we’re supposed to be on dates. With other people. Play with Adam.” I straighten, but she reaches out, grabbing my shirt.

“I want that cruise, Josh, and you’re smarter.”

“Why do you think I’m smarter?”

“I saw Adam flexing in the windows outside the car. Call it a hunch.”

“Hazel, a normal cruise is bad enough. You really want an all-you-can-eat buffet on a budget cruise?”

She drops back in her chair and I know I’m going to regret this.

She immediately perks up. “Next time?”

I quickly clarify. God, it’s been two seconds and she already looks smug. “If we do this again. Look, I can admit it’s been good to get out of the house. I was spending too much time at home and–“

“Playing with yourself because nobody else wants to?”

“I give her a warning look. “It’s possible you were right–about the wallowing.”

“Possibly,” she says with a small smile.

“I knew it! I knew you were as competitive as me.” She points to my stomach. “I mean, a person doesn’t get abs like that without a lot of drive–“

“Of course!” Hazel leans closer, reaching for his arm and lowering her voice, but I can still hear her. We can all still hear her. “Hey, would it be okay if I was on Josh’s team? He’s not very good at this kind of thing and I don’t want him to feel bad. Shaky confidence, you know.”

“Of course,” Cali volunteers with a sympathetic nod. “Adam and I can team up!”

With that settled, a grinning Hazel hand out the cards. By the time I get mine, she’s already written our team name across the top: Stephen Hawking’s School of Religion.