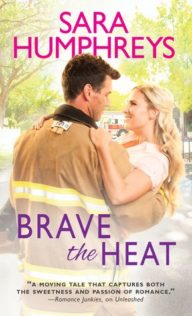 Brave the Heat (The McGuire Brothers, #1) by Sara Humphreys

[box style=”rounded” border=”full”]In her first contemporary story, Sara Humphreys proves that she doesn’t need to hide behind the gimmick of vampire teeth and magic to write a good story. Brave the Heat is a sweet romance which focuses on getting past the fears of the past so that you can grab hold of the future that you want. [/box]

The first book in the McGuire’s Brothers series focuses on the eldest brother, Gavin.  Always the protector, a childhood trauma lead Gavin to his career as a firefighter.  Gavin has been promoted to Fire Chief of their local town of Old Brookfield. There have been some suspicious fires around town and it is looks like they have a budding arsonist running around. Gavin isn’t about to let any of his men get hurt and he is determined to find this person and make them pay before someone gets hurt.

The heat of the fires might be nothing compared to the burn in Gavin when Jordan McKenna comes back to town. Jordan was Gavin’s high school sweetheart and the woman who walked away with his heart. That was fifteen years ago, not that he hasn’t felt the pain every day of those years. Gavin doesn’t want to risk his heart all over again, but having Jordan so close, and with her two adorable little girls in tow, does he even have a chance?

Jordan left town because of her drunk and abusive father. She wanted to live her dream in New York City.  A dream she didn’t think Gavin shared or even supported.  A dream which bubble burst a long time ago. She ended up married to a man who was a wealthier, slicker version of the abusive, controlling, and drunk father she ran from. She has returned to Old Brookfield after an ugly divorce to at last confront her dying father and to provide her young daughters with a more stable a home life than she had.

But her biggest regret is that she, even for a moment, thought Gavin was anything like her father. She ran away and left behind someone who truly loved her but is it too late to try again? It is not just Jordan’s heart she would be risking this time. She is trying to protect her daughters too. Can she risk their little hearts if Jordan and Gavin can’t get past their own painful past.

THOUGHTS:
I enjoyed this group of characters presented in this new series. We even get a quick glimpse of the other hot, sweet brothers and potential storylines for the next novels.

At first I had an issue with what I saw as a B.S. break up which had torn these two lovers and best friends apart fifteen years earlier. Then I really started thinking about it.  At 18, most of us aren’t mature enough to talk things out and a stupid argument can mean the end of the world.  Most 18 year old’s don’t have enough life experience to realize the mistakes they are making or their own misjudgments. So, yeah, I can see the 18-year-old Jordan and Gavin having a misunderstanding and not discussing their actual feelings or trying to contact each other after Jordan leaves. They would be holding on to hurt feelings and pride long after their breakup and never thinking the other also wanted to start again.

Sadly, 15 years later and their communication skills are not much better. There are some crossed signals of who wants to move forward and who wants to put on the brakes. They eventually figure it out and both pull up their big girl panties and talk out their desire for a second chance.

And you also can’t lose with any story containing adorable kids or a smart dog. 🙂

Lily and Gracie came running into the kitchen.

“Mama, can we have extra book time tonight?” Lily asked, clinging to Jordan’s legs and staring up at her with big, mooney eyes. “Please?”

“Sure,” Jordan said. She pushed Lily’s blond hair out of her eyes. Gracie, was as usual, standing right behind her big sister. “Why the burning desire for more book time? Not that I’m complaining.”

“Look.” Gracie held up a book with a shiny black cover. Taking it in her hands, Jordan turned it over and grinned when she saw the top hat and rabbit. It was an older book and had clearly seen some use. But it was still in good shape. Jordan recognized it immediately. “The chief gave it to me and Lily. He said it will help us be ‘gicians.”

“Mr. Magic’s Twenty Best Tricks for Kids.” Glancing at Gavin, she teased. “Did you write this? You are, after all, Mr. Magic.”

“He said no,” Gracie repeated.

“This was yours,” Jordan murmured. “I remember it.”

“Yeah, it’s no big deal.” Gavin shrugged and waved it off. “It was sitting around my parents’ house collecting dust, and since Lily and Gracie are so keen on learning new magic tricks, I figured…what the heck? May as well put it to good use. Right, girls?”

“Right,” they said in unison.

“Right,” Jordan whispered. Her throat thickened with emotion as the purity and genuine sweetness of his gift sank in. Clearing her throat, she forced herself to speak up. “Okay, girls. Go on up and get ready for your bath. You have have an extra half hour of book time tonight, but then it’s lights out. I’ll be up in a minute.”

Shrieks of glee filled the kitchen as the girls jumped up and down before grabbing the book and heading for their bedroom. About two seconds after vanishing, Gracie reappeared in the kitchen, ran up to Gavin, and wrapped her little arms around his legs, giving him a hug.

“Fank you, Chief.” Tilting her head back, her messy dark-blond hair spilling down her back, she said, “I hope your house says stinky wif paint for always and you haf to stay here wif me and Mommy and Lily forever!”

Leaning back on the edge of the counter with both hands, Jordan looked at the man across from her and swallowed the sudden swell of emotion. Silence hung between them, with the sound of the waves and Gracie’s giggles as she ran from the kitchen.

Giving the girls that book–a book from his childhood that she knew meant something to him–was more than merely a sweet gesture. It was stirringly heartfelt and personal, and that was what scared her. Actually, if she was going to start being honest with herself, that was only part of what frightened her. Having Gavin in the house had been difficult, but now she realized that the really big challenge, the toughest part, would be when he left.

This part week hadn’t only been about lots of laughs for the girls and sexual tension-filled moments for her. Not even close. When she got right down to it, these past few days were the first time Jordan had really felt like they were a family.