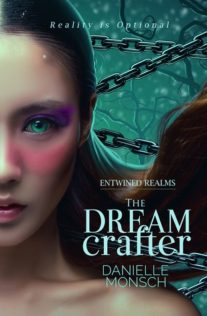 [box style=”rounded” border=”full”]I love this series. I think the world building is creative and is open for all sorts of story lines. The characters are so enjoyable. We’ve been waiting awhile for this second book and I tried really, really hard not to read it in one day but the best I could make myself do was two days. Now the wait beings again.  MORE PLEASE! [/box]

This second novel in the Entwined Realms series focuses on a mercenary named Merc. The Guild wants to get their hands on Merc, or more particularly, what Merc is holding. Merc was able to obtain an object known as The Spellbook when the Guild’s vault was breached in Book 1, Stone Guadian, and hundreds of dangerous magical items were stolen.

Somehow a lowlife named Hadrien was able to put a Bound on Merc. The Bound requires that Merc to deliver the Spellbook to Hadrien at a specific time, or he will die. Obviously, whether or not he wants to work for Hadrian, Merc has no choice but to deliver the Spellbook to him. What Merc never expected was to be betrayed by the only person who has been able to get under his defenses and catch his interest.

Since she was a child, Amana has been able to visit people in dreams. When she walked into the dream of a man with such lovely eyes and a soul-deep kindness, there was an instant connection. She has never been interested enough to attempt to try to find someone she met in dreams, but this man she has to see again.

The Guild wants something from Amana.  They want it bad enough that they will set Amana’s brother free from his imprisonment, but she has to do something for them first. She has to go into the dream of a mercenary and steal a book from him. As the Oracle would say, there are no coincidences. Amana is devastated to find that mercenary just happens to be the man who is stealing her heart in the dreamscape. Amana will have to betray the man who could have been her future in order to save her brother.

She has no choice but to go to  Merc again in his dream and this time steal the book, but by doing so, she sets off a chain of events that will have all the wrong people focusing on something more valuable than a powerful Spellbook — a Dream Crafter.   Dream Crafters were killed off a long time ago because their powers rivaled the gods. To capture and control a Dream Crafter would make you a deadly opponent and nothing would be out of your reach.

Can Merc forgive Amana for her betrayal? More importantly, can he steal back and deliver the Spellbook in time to save himself from the Bound and still keep Amana safe from every lowlife scum looking to capture an ultimate power?

THOUGHTS:
I just love this series. The world building of the Great Collision, smashing our dimension with that of a world of magic and fantasy, was so creative and clever.  It truly opens this series up to any possible story line.  We have been waiting for the second book to be released so I tried really, really hard not to read it too fast but I just couldn’t help myself. What are you supposed to do once you start a good book? Stop? Then I would just keep thinking about it anyway.

I would put Merc under my favorite category of damaged heroes even though he technically doesn’t fit. Merc isn’t damaged so much as misunderstood. Merc is a big, scary, dangerous-looking mercenary and most people are smart enough keep their distance from him. But underneath it all, Merc is just lonely.  He doesn’t trust many people and with the exception of some loyal friends, no one takes the time to see the gooey, sweet guy inside. When Merc meets Amana in his dream, she sees this right away and wants to find him again. Merc thinks she is just a dream but he misses her just the same. When they meet again the next night, Merc and Amana are both floored by their connection, that’s why Merc is so hurt by her betrayal. To be fair, Amana has no idea that Merc has a Bound on him to deliver the book. Amana has been trying for a decade to free her brother from his prison so the Guild’s offer to free him is too much to pass up.

The Guild is a very important focus of these stories and many of the main characters of the series are part of the Guild. I thought it was interesting that the characters in all the books and novellas are always “Don’t trust the Guild.” In this one, we truly see why they say that. The Guild definitely have an underlying philosophy of “The ends justify the means.” Yes, the Spellbook is dangerous and needs to be locked away from the evil-doers who want to get their hands on it, but the Guild’s Plan B, C, D, E, etc. to get that book back no matter the consequences, kept putting Merc and Amana’s lives in serious peril.  I was starting to question my own loyalty to the Guild.

The Merc/Amana connection was just so sweet.  I loved them.   There was a brief introduction of the characters which are part of the next book as well as a Fallon/Reign teaser.  Love them!  I really can’t wait to get to their story.

I love this series and can’t wait to read more.

Fallon now stood, tall for a woman, but what had Amana shivering, rubbing the back of her neck to smooth the raised hairs on her nape, was the pure power and menace the woman projected. The werewolves? Schoolboy hijinks in comparison.

Fallon said, “Inara, the anti-shift spell still up and running?”

Ignoring Laire’s groan, Inara smiled. “Of course. You know Rhaum wouldn’t let that spell lapse. Unless those furballs are somehow special–” All three women took a long look at the pack of young men and in seconds shook their heads over that possibility, “–then it’s strictly dealing with them in human form.”

“Yeah, yeah, we’ll get there.” Fallon started her way down the steps. Laire stayed put, and looked put out, crossing her arms and mumbling words of doom.

From their seats, they had a perfect view as the redhead put herself in front of the brunette girl, who turned and scurried away, relief etched into her face. Fallon was tall but the werewolves were all her height or taller, and they were certainly wider. They gave lecherous looks and wide grins at the redhead in their midst.

As if sensing things were about to happen, the crowd quieted, people moving away from the bad vibes which were building around the werewolves. Fallon gave a fake pleasant smile at the surrounding males. “Wolfboys, think you can keep both volume and property destruction to a small roar, and please don’t bother the serving staff?”

The leader of the group gave an open up-and-down leer. “The only way I’d call you a bouncer is because of your chest. Do you want to play with the bad wolf, eh, Red?” His companions added their own loud howls of laughter to bolster the leader’s courage.

The smile stayed in place as Fallon leaned a little closer. “I don’t think you have anything interesting enough to play with, and quit fucking up everyone else’s night.”

The laughter turned to growls, and anything sexual was replaced by pure aggression. “Little girls who get mouthy get put in their place real quick.”

Fallon put her hands in the pockets of her pants.

Laire jumped up and pointed at Fallon while yelling, “No you don’t! Mr. Grok! Four months! Get your ass back here now!”

“She put her hands in her pockets. I better call Rhaum,” said Inara, and from somewhere in the impossibly tight clothes she was wearing, Inara produced a phone and began talking on it.

These women were offering her dreams by destroying her peace, and she was sure she was going to grow to hate them, but Amana didn’t want to see Fallon hurt because she was trying to save the waitress. “They’re gearing up to attack. Can you use your magic to help out? Because if Fallon doesn’t get back here, there’s going to be a fight.”

The look Laire gave her was duh personified. “Why do you think her ass is down there? She’s nuts enough to enjoy that type of thing, not giving a thought to friend’s appointments.” The last couple of words were said in a louder tone, but the narrowed eyes and small huffs of breath told the story that Laire was resigned to being late or missing her appointment and was not active in thinking of retributory acts.

“She doesn’t have a weapon, and her hands are in her pockets.”

Laire shrugged it off, crossing her arms in front of her chest as she watched. “Granted, if they could shift she might need to grab something pointy, but they’re only in human form. And she always pulls that crap with the pockets.”

Laire’s voice lost any humor or outrage. It was stark, full of bitter remembrance. “Because if someone takes a swing at a woman who is not in any position to defend herself, they deserve whatever happens to them.”

The leader of the group threw a punch.

He was laughing as his arm glided through the air, expecting to knock out the woman in front of him without putting any effort into it. In short order he was brought down by a heelstrike against his ankle, a boot to the side of his knee, a knee to the underside of his jaw, and a stomp on his face, which left him with a bloody mess of a nose, and to the windpipe, which left him gasping for breath and turning an ugly purplish shade.

And Fallon’s hands were still in her pockets.

By the time their friend turned a sickly shade of puce, the others were clued in this wasn’t an easy target and they joined the fight. Fallon ducked and sidestepped, which allowed two of them to crash together before she leaned forward and kicked back into the stomach of the third, which caused him to double over, an overloud ooff escaping him.

And with that, it turned into a brawl.

Review: The Mist-Torn Witches by Barb Hendee
« Review: Brighter Than The Sun by Darynda Jones
Review: Nuts by Alice Clayton »

One response to “Review: The Dream Crafter by Danielle Monsch”