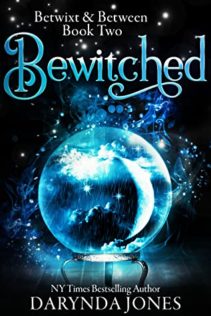 Bewitched (Betwixt & Between #2) by Darynda Jones

Forty-something Defiance Dayne only recently discovered she comes from a long line of powerful witches. Added to that was the teensy, infinitesimal fact that she is what’s called a charmling. One of three on the entire planet. And there are other witches who will stop at nothing to steal her immense power, which would basically involve her unfortunate and untimely death.
No one told her life after forty would mean having to learn new lifeskills—such as how to dodge supernatural assassins while casting from a moving vehicle—or that the sexiest man alive would be living in her basement.
Whoever said life begins at forty was clearly a master of the underappreciated and oft maligned understatement.

Darynda Jones shows that the magic just begins at forty in her newest paranormal women’s fiction.

Bewitched begins right after Betwixted or should I say several months after Betwixted.  Because of the amount of power Defiance used at the end at the end of Betwixed, it dropped her into an enchanted coma for a few months. After she wakes from her Snow White slumber, she tries to convince everyone that she lost her powers in a big burnout of magic. She does this because while she was imitating Rip Van Winkle, she felt something malevolent try to get to her. She knows that someone is coming for her charmling powers and she doesn’t know how to protect her friends and family when it finally arrives. She hopes that if she doesn’t use her magic, maybe it won’t be able to find her.

Problem with that is her BFF Annette has been preparing to open their Private Investigator/Finders of Lost Things venture, Breadcrumbs Inc., and has been announcing Defiance’s magical abilities for anyone to find on Facebook.

Defiance also has spirits following her home both evil and adorable but malevolence doesn’t just come in magical form. Banging on her front door is someone who wants Defiance to raise someone from the dead…you know, someone he accidentally killed and he’s pretty insistent that Defiance helps him…or else.

Everything about this series appeals to my fantasy loving heart. We have magic, shape shifters, ghosts, hilarious humor and a great cast of characters who support Defiance. And while she didn’t learn about her magical gifts until she was 44, it keeps coming back to her either subconsciously or when she is under pressure. This way Defiance doesn’t fall completely into that clueless group of fantasy heroines who suddenly find out of the supernatural world and run around waving their hands. She does keep walking into bad situations and has, on occasion, been rescued by the really hot wolf shifter living in her basement, but we’ll forgive her because…well, Roane.  Hell, I would get myself into trouble just to have him jump in to save me.

The series also has a nice balance of breadcrumbs being dropped for the overall series arc but enough answers in each story to keep us from being completely frustrated. I am looking forward to the next story.

I abbreviated this scene down when Defiance first wakes up from her magical coma but thinks she is dreaming.

“Defiance,” Annette said. She covered her mouth with both hands and said from behind them, “Oh, my God. “You’re…you’re here. You’re alive. You’re awake.”

“I am.” I moved in for a quick hug and she stiffened. Even in my dreams she wasn’t a hugger. I have her a quickie then pulled back and smiled up at the chief. “Hey, Chief.” When I gave him a quick hug as well, he leaned into it but didn’t reciprocate.

Odd. He was a total hugger. “Daffodil.” He seemed just as surprised as Nette to see me. Also odd. A warm smiled softened his face. “Are you okay?”

“Never better, Chief.” Turning to Roane, I grabbed a handful of his T-shirt and pulled him toward the stairs. “Come with me, mister.” Our hugging needed to be a little more…private. “Since I’m dreaming anyway, I may as well make it a wet one.”

The surprise on the chief’s face was precious, the wicked grin on Roane’s was priceless.

“Deph.” Annette shifted her weight like she was suddenly uncomfortable. “We should probably talk.”

I turned to her. “Yeah, I don’t think so.” She wasn’t about to ruin what came next. “See this man right here?” I leaned in and bopped Roane softly on on his perfectly shaped nose.

His grin widened, and he shook his head.

“This just happens to be the man of my dreams. And since I’m dreaming, there’s simply no better time to have sex with him.” I gave Roane a saucy once over. “We should hurry before I wake up. Talk about coitus interruptus.”

He disguised a laugh as a cough behind a very large closed fist.

I almost drooled. “I can’t even imagine what those hands are capable of.”

He sobered and pulled his lower lip between his teeth, eyes glistering with interest.

“No, you don’t understand. Things like this don’t happen in real life.” I demonstrated by putting my hand on the banister.

The vines parted soundlessly, their movements graceful and hypnotic. “Therefore, this is a dream.” I practically melted against Roane. “Therefore again, you and I are going all the way. Twice. ” I took his hand and led him up the stairs. Speaking over my shoulder, I elaborated, just in case he needed clarification. “We’re getting it on.”

The chief only chuckled.

“We’re parking the Plymouth in the garage of love.” I lifted his hand over my shoulder and led him up the thick wooden steps. “I haven’t had a cookie dipped in this cream in far too long.” Then I turned and speared him with my best come hither. “Can you tie a knot into a cherry stem with your tongue?”

“Wait!” Annette ran up the steps. “Look.” She pointed to the boots she wore and, more specifically, to the vines crushed underneath them. “They don’t move for anyone but you.”

“Because it’s my dream, silly goose. But right now”–I gestured to Roane–“I’m going to tear this man’s clothes off. With my teeth. Then we’ll do breakfast. How’s that?”

My younger and only slightly more fit Papi cast a withering glare in Roane’s direction.

He held up his hand in surrender. “You know I wouldn’t.”

“What?” I turned to him with a pout. “You won’t dip your cookie into my cream?”

Roane pinched the bridge of his nose, but there was a distinct smile behind his hand.

Annette ran up to the landing, crunching the poor vines on her way. She started to put a hand on my arm but stopped herself. “Deph, think about it. You live a magic house haunted by your dead grandparents.”

A quick glance at my dads told me she was right. They waited, giving me a moment to let it sink it. The horror I’d tamped down ricocheted with a vengeance. It exploded in my chest and caught fire to my skin. I dared a quick glance at Roane. Heat burst through me, and I could practically see the blush sliding up my neck and over my cheeks. I worried it would be permanent.

“Let’s get you dressed,” Annette said.

It was only then that I realized the gauze gown I wore was a tad see-through. Great. My face caught fire as I looked back at Roane, who’s expression was full of sympathy. Humiliation stung the backs of my eyes.

“The answer is yes.” His voice, smooth and deep, sent a ripple of heat straight to my core.

He grace me with a lopsided grin. “The cherry stem.”

And my mortification was complete.

“I’ll demonstrate whenever you’re ready.” To the warning glances he received from my dads in response, he added, “On an actual cherry stem. Naturally.” 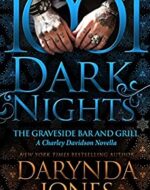 Review: The Graveside Bar and Grill by Darynda Jones