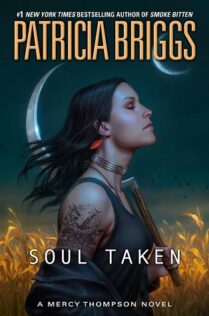 The vampire Wulfe is missing. Since he’s deadly, possibly insane, and his current idea of “fun” is stalking Mercy, some may see it as no great loss. But when he disappears, the Tri-Cities pack is blamed. The mistress of the vampire seethe informs Mercy that the pack must produce Wulfe to prove their innocence, or the loose alliance between the local vampires and werewolves is over.
So Mercy goes out to find her stalker—and discovers more than just Wulfe have disappeared. Someone is taking people from locked rooms, from the aisles of stores, and even from crowded parties. And these are not just ordinary people but supernatural beings. Until Wulfe vanished, all of them were powerless loners, many of whom quietly moved to the Tri-Cities in the hope that the safety promised by Mercy and Adam’s pack would extend to them as well.
Who is taking them? As Mercy investigates, she learns of the legend of the Harvester, who travels by less-trodden paths and reaps the souls that are ripe with a great black scythe. . . .

Mercy Thompson is one of my favorite series and this story is a perfect addition.

People around the Tri-Cities are going missing. People with small magic, such as half-fae and white witches. At first no one noticed because many with small magics pick up and run whenever something more dangerous begins stalking them. But enough have suddenly disappeared that others around the city have taken notice and rumors are running rampant that the Columbia Basin Pack, the Pack that swore this was a safe-zone, is to blame either for causing the disappearances or ignoring the disappearance of unimportant citizens.

Is it just a coincidence that a movie called The Harvester  just releases that features a possessed scythe that makes the holder harvest souls.   A story that Mercy’s friend, Zee, confirms is true.  As this same scythe is what drew Zee to the Tri-City decades ago when he was tasked by the Grey Lords to destroy it.  Only it may turn out that the object Zee destroyed wasn’t the actual Soul Taker.

Of course, nothing is so simply for when Mercy is involved and it is hard to focus on finding whoever is wielding this tool when  something is also happening with the local vampire seethe.   Wulfe has gone missing and Marcillia is accusing the pack of disposing of him.  Everyone knows that Wulfe has been focused on Mercy for the last year or so which has escalated to full scale stalking in recent months.   Mercy and Adam need to track down Wulfe and show that he isn’t dead…well, more dead for a vampire.  Add to that Mercy can’t seem to reach Stefan, except in dreams but are they real connections or simply dreams?

Mercy and Adam also have to deal with the fact that after decades, Sherwood Post regains his identity (see Wild Signs) and it turns out this broken wolf it far too dominant to submit to even Adam.  Will Sherwood fight Adam for the pack?  What was Bran thinking when he sent him to the Columbia Basin Pack, and will this mean the end of the pack as we know it?

Mercy may be distracted by everything that is going on which is probably why she stumbles into an encounter with The Harvester in which she barely survives.  Now the Soul Taker has had a taste of Mercy Thompson Hauptman, daughter of Coyote, and has decided that she would make the ultimate sacrifice.

Zee desperately wants to destroy the artifact that he missed several decades ago but some moments his desire to see the scythe flirts with avarice, and Mercy begins to fear putting a powerful old weapon into the hands of a powerful old fae.   Is her love for Zee clouding her judgment or is it simply fear of the Soul Taker?

I always liked that this series has a bit of a darker edge than many Urban Fantasy series in how Patricia Briggs portrays the vampires, werewolves, witches and fae.   I also like how the stories continue to actually build upon the last. We don’t always get a clean resolution at the end of a story for everything and issues created in one story continue as obstacles in the future books, such as Mercy declaration the bridge and Elizaveta’s curse upon Adam.  Even Adam’s nudge has become a standard secret code.

This is such am amazing series and Soul Taken lives up to what we expect from a Mercy Thompson story.

“Well now,” said Zee, cleaning his hands with the gritty orange soap we used to get tough grease and other substances off. “You stepped on a spider-like half-fae creature and got punctured. And the vampire told you to have me check your feet.” He paused. “In a dream.”

“It sounds really stupid when you say it like that,” I told him, in an irritated voice that was meant to cover up the butterflies in my stomach. I suddenly really, really didn’t want him to look at my feet.

He dried his hands off and then looked at me. “I can’t help how it sounds, Liebchen.

The phone rang and he gave a hiss of irritation and his eyes flashed with real temper. “I am going to pull that thing out of the wall,” he growled. He looked at Adam and lowered his lids in consideration–the expression made him look like a fiend contemplating the next child he was going to eat.

“You,” he said, “and you.” He looked at Adam and then George. “Go out and answer the phone. Keep the people who come to bother me–“

Zee brushed that away with a flick of his fingers. “Customers. Pests. Nenn sie wie Du willst.”

Zee snorted dismissively and waived his hands at my mate and George. “Go and tell them we are closed for an hour at least.”

I wanted…hoped…for Adam to take offense at Zee’s tone. Then maybe I could delay Zee examining my feet.

Adam gave me a shrewd look, jerked his head at George–who was the one who looked stung at Zee’s attitude. When Adam closed the door behind him, it did have a bit of a snap, but he left me alone with Zee anyway.

And that was good, right? Because I needed Zee to look at my feet. I couldn’t figure out why I didn’t want him to do it.

“I cannot do this,” Zee told me with a frown, “without a payment.”

Which was the beginning of negotiations. There were good reasons for the fae to bargain when you ask them for favors. Balance was very important for fae magic, and it ran in their blood and bones the way that the need for success ran in human culture. Despite the shard of hope I felt at his first words, it soon became apparent that Zee was feeling mellow. Or maybe he was worried about my feet, because he didn’t bargain very hard.

As payment for his doctoring, he demanded I tell him everything that had happened, starting with my bruised face and ending with me sitting on the cold concrete floor of the shop with my feet in Zee’s lap while he sat on the short mechanic’s stool.

I’d negotiated so I could leave out the bit about Sherwood because that was pack business and had nothing to do with the mess the vampires were in. I could probably have left out the part about the missing and dead witches–and the dead young man at the grocery store. But Zee was a useful source of information. The more I told him, the better the chances were that if he knew something, he could tell me about it.

“Spiders,” said Zee thoughtfully as he ran a grease-darkened finger over the bottom of my foot.

I had been getting more and more uncomfortable, almost jittery. My hands and butt were too cold from the chill concrete. The garage stank of burnt oil, diesel fuel, and rubber–which it always did, but this time it made me feel as though I couldn’t breathe. The overhead lights were too bright. Mostly, I very much didn’t want the old iron-kissed fae to put his hands on my feet. Not at all.

Overcome by a desperate urgency, I pulled one of my feet away, but managed to keep from trying to free the one Zee was holding. Zee’s eyebrow went up–and he tightened his hand around the ankle of the foot he still held.

Adam opened the door and stuck his head in the garage bay. “What’s wrong?” he said sharply. He must have felt my sudden panic.

“Mercy has been infected by a particularly malicious bit of magic,” said Zee clinically. “Next time some fae spider shoves a bit of themselves into her, could you bring her to me right away? It would have been a lot easier to fix right after it happened.”

When I jerked my leg, he kept his hold on my ankle without visible effort.

“I think,” Zee said thoughtfully, “that you and your comrade should clear out the office, lock the door, and put up the ‘Closed’ sign. When you are done both of you come in here. This will take a bit longer than I had assumed.”

He glanced toward the front of the garage, and the motors that powered the bay doors switched on. The big doors clanged and shivered and closed me in.

Audiobook Review: Burn for Me by Ilona Andrews
« Friday Giveaway: Love on the Brain by Ali Hazelwood
Review: Love in the Time of Serial Killers by Alicia Thompson »