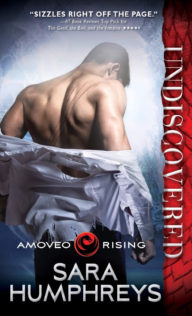 He's the man of her dreamsA long time ago, Zander Lorens was cursed to walk the earth stripped of his Dragon Clan powers. Every night, trapped in a recurring nightmare, Zander relives his darkest moment. He can hardly believe it when the dream changes and a beautiful young woman appears. Zander believes she's the key to ending his torment. Finding her in the real world is one thing, but how will he convince her of who-and what-she really is?

She's the end to his nightmareRena McHale uses her unique sensitivity as a private investigator, touting herself as a "human divining rod" and finder of the lost. By day she struggles with sensory overload, and by night her sleep is haunted by a fiery dragon shifter. Nothing in her life makes sense, until the man from her dreams shows up at her door with a proposition...

In fairness I want state that this is not one of my favorite tropes and I was unaware of that when I picked it up since there was nothing about it in the book description.

Some small spoilers as we discuss plot issues.

Rena is a private investigator who Zander hires to find his brother. What he does not tell her is that he knows exactly where his brother is, but Zander needs Rena to free Zed from his imprisonment.

Let’s make sure to point out the best part.  I really liked Rena.  I loved that Rena was no-nonsense and called Zander out of all his bullshit, which is all the bullshit that I didn’t like in the story.  So Rena was me in this story. 🙂  I also like the Rena/Zander scenes while they lasted.  Problem was that Zander was such a martyr, those scenes didn’t last long.

What is not mentioned in the book description is that Zander believes Rena is his brother’s mate, not his own and no matter how much sizzle these two had, Zander intended to bring Rena to his brother and “sacrifice” her for Zed. Zander, the dragon-shifter, is an identical twin, which is unusual for shifters since this messes with the mating bond and either brothers could mate with the one woman born for them.  Now, I have seen this plot several times in menage erotica stories where twins have to share their fated female, but never in a paranormal romance when you are going to end up with one unhappy third wheel.  If I were a twin, I think I would find the idea of being considered interchangeable quite offensive since Zander keeps telling Rena that the feelings she has for Zander will transfer over to Zed once he wakes up.

So Zander and Zed were cursed 500 years ago. Zander has been walking the earth looking for a way to break the curse while his brother has been stuck in his dragon form in hibernation for the last 500 years.   So this is one of those plots that I hate.  I don’t know the official term but it’s the “I’m escorting you to another man but we fall in love but you’re not mine and I will sacrifice and give you up for the greater good” trope. Whether it is a knight escorting the Queen-to-be to the kingdom, or in this case, you are destined to be my brother’s mate and only you can break the curse so he deserves your love and I have to sacrifice you to him, it is not my favorite storyline. While you are supposed to see that he is making the ultimate romantic sacrifice, all I see is the underlying premise is that she’s a thing to be given up. He’s making the sacrifice and she isn’t even consulted about it.  Again, Rena calls him on it and explains I’m not a secondhand bike you can pass down.

In Sara Humphrey’s paranormal stories, connections in the dreamscape are a major plot of the story. Here is no different and Rena believes she keeps dreaming about being stuck in the forest and being chased by dragons. What is actually happening is that she is watching the dream reenactment of the fight between Zander and Zed that caused them to be cursed. Zed and Zander were fighting over a woman and while early descriptions in the story would lead you to believe that they both loved her and this time Zander is going to sacrifice his love to his brother, we actually see that Zander was walking away from Adrianna the first time, but that she instigates a fight between Zander and Zed because she wanted the two dragons to fight over her. In fact, the few scenes we see of Zed in these dream scenes make me think that Zed is the hot-headed, bad-tempered brother. Not someone I would want to be sacrificed to, thank you very much.

I almost stood up and clapped when Rena finally tells Zander to stop doling out information like he is saving it for a special treat and tell her everything now! How many times have we shouted that at the characters in a story? Ummm…just me? Oookay then.   Rena also gives him a big F.U. when he tells her that she is his brother’s intended mate and she explains to him that this is the twenty-first century and he can’t just chose to deliver her like a present. That she is a person and makes her own decisions. YOU GO GIRL! I couldn’t have been happier at this point.

Don’t get me wrong, I liked Zander even with his life-is-too-long sadness.  And I really like Rena and felt bad for the half-Amoveo shifter who was abandoned as a child and tossed from home to home because she was too odd. She never felt loved and add to this, her attraction to Zander and his willingness to pass her off to his brother. Life sucks for Rena and she deserves better. If Zed is such a prize, Zander should have spent all is time telling Rena stories of all the awesome things that make Zed wonderful so that maybe she would choose to give Zed a chance. And that doesn’t even start to take into account that you are tossing Rena at a man/dragon who has been asleep for 500 years, knows nothing about modern life and will probably waking up with a shit-ton of issues. Wow, sounds like Rena is being set up to win the romantic lottery, right?

I like all of Sara’s other stories and series.   This review has less to do with the writing, than the type of storyline. It is definitely a matter of “it’s not you, it’s me” since there are simply tropes and storylines that I don’t enjoy and for the most part I avoid them, but here I was unaware where we were going until it was already started.  If this plot doesn’t rub you wrong, like it does to me, you will love Rena and be excited when everyone gets their HEA.  Me, I was just happy they finally got it worked out and I could move on.

Review: Wicked Ride by Rebecca Zanetti
« Review: Crave Me by Cecy Robson
Review: Brighter Than the Sun by Maya Banks »