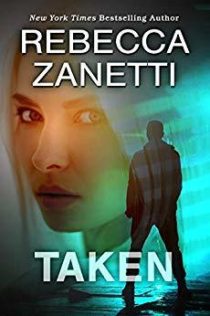 Hunter Holt might be the most stubborn ex-soldier ever born, but when he’s called on to help find a lost foster kid, he jumps into action. Even if it means working with the woman who broke his heart five years ago—the woman who still haunts his dreams . . .

Faye Smith has spent five long years trying to get her life back on track. She knows she should’ve turned toward Hunter and not away from him. But they both had too many demons to destroy. Maybe now they’ll get another chance—and save someone else’s life too . . .

But first they’ll have to stop arguing long enough to trust the Deep Ops team. Hunter was a lost boy himself once. In fact, he ran away from the exact same man, their monster of a father. Now he and Faye will have to unite to find the brother he never knew—and maybe each other . . .

My favorite part of this series is the fact that the characters are all flawed. They aren’t machines. They don’t just kill enemies and move on unscathed.   They have experienced bad things and now have to deal with that and move on. This gives them depth. This makes them human and much more enjoyable characters.

Taken is a novella in the world of the Deep Ops series which features friends of Raider Tanaka, who we met in Book 1 and who is a part of the HDD group.  Raider, Hunter and Faye all grew up together in a foster home run by Miss A, after being removed from abusive homes.   Their tragic childhoods created a bond between them and made them a family by choice, and when one needs help, they are all ready to step up and help.

In Taken, Hunter finds out he has a half-brother, who is only a teenager and who has been seduced by his married teacher. They are currently on the run and the teacher not only has a thing for young men but she also likes to rob convenience stores. Hunter needs to get to young Jackson before this kid is killed by a trigger-happy sheriff or bounty hunter.

Usually the problem with novellas is that they are trying to give you a romance as well as an exciting story. Here, we already have the romance as Faye and Hunter were each other’s first loves but split five years ago when their own personal traumas became too much and instead of leaning on each other, they ran away. There is no question that there are still strong feelings between them and now that they have had a chance to deal with their own issues, they both realize that they handled their relationship badly. This way we can deal with tracking the missing teen and we are not having insta-love shoved at us.

We do have guest appearance/crossover in this story which was fun, and we get a little more time with both Raider and Wolfe from our original series so we get to know them just a little bit better. But, even if you haven’t read Hidden, you can read and enjoy Taken as just as exciting action story.

“Hunter? Don’t shoot me, brother,” Raider called from the darkness.

Faye halted. Her chest expanded, and her arms tingled “Raider!” She ran full bore toward the end of the deck. Hunter clotheslined her around the waist, drawing her up short and forcing the air from her lungs. “Get behind me,” he hissed.

She coughed, her eyes watering. “What the heck?”

“So what?” She winced as he set her down and her lungs filled. “What is wrong with you?”

Raider emerged from the trees on the path. He wore a black leather jacket, dark jeans, and a button-down shirt. Moonlight glinted off his short black hair. “You couldn’t extend your driveway to the cabin? It’s quite a hike.”

“Who’s with you?” Hunter asked.

Another man walked out–this one beyond huge. He stood about six-six with a broad chest in what had to be a specially made leather coat, one battered and well worn.

“This is Clarence Wolfe,” Raider said. striding toward them over the rocks. “He’s with my unit.”

Hi,” Clarence said. “Call me Wolfe, or I like to hit people.”

Wolfe it was. No problem. With a happy cry, Faye launched herself from the deck. Raider caught her easily, lifting her off the ground and hugging her hard. “How’s my girl?”

“Great.” she kissed his chin and held him tight. While she and Hunter had gone a different direction before crashing and burning, Raider would always be her brother. She leaned back to look at him. “I swear, you get better looking every year.” It was true. Raider was part Japanese, and his blazing black eyes had always fascinated her.

“So do you, sweetheart.” He set her gently to the side. “Faye Dunnaway? McGillicudy? Jordan? Who are you this week?”

She rolled her eyes and gave her standard explanation. “Still Faye Smith. I haven’t found the right last name yet.”

Raider grinned. “Faye, this is Wolfe.”

The giant held out a hand that swallowed hers past the wrist. “Hello. I’m here to back Raider up in case anybody tries to hurt him.”

“I truly am.” Wolfe had buzz-cut brown hair and light brown eyes. Several healed knife wounds showed along his forearm. “You’re pretty. Are you dating anybody?”

Raider tugged her hand free from Wolfe’s. “You can’t date my sister.”

Wolfe looked from one to the other. “She can’t be your sister.”

Wolfe’s eyebrows lifted into his hairline. “You sound southern, with a very cool accent. Raider does not. Families should sound the same.”

Her mouth gaped open and she angled slightly away. “Is he serious?”

Raider sighed. “Yes, and he’s genuine.” He let his southern accent, the one he’d fought so hard to banish, out with the words. “Is this better?”

Raider nodded. “Yep. When I started learning languages with Homeland Defense, I worked on diction. The accent is too easy to identify.”

Wolfe grinned, looking like a lethal puppy. “That’s cool. I like your real voice.” He frowned. “Hey. Why can’t I date your sister?”

“Because one of my brothers already did.” Raider muttered, looking up at Hunter. “Put the gun away.”

A meow caught Faye’s attention, and she turned again just as a cute little furry white head poked out of Wolfe’s pocket. “You have a kitten in your pocket.” The kitten had bright blue eyes and one mangled ear. It twitched the healthy one.

Faye tried to keep her mouth closed as she looked up at Raider, who nodded. What in the world? Raider was paired with a formidable-looking guy who kept a kitten in his pocket? Was her brother finally loosening up a little? “This is interesting,” she murmured.

“Isn’t it, though,” Hunter drawled form the porch, slipping his gun back into place. Now, there was a southern accent. I licked right down Faye’s spine to pool in her abdomen. She barely covered a shiver.